Domeq residential building participated in the 4th edition of Open House Brno, which attracted over 17 000 visitors. This annual festival allows people to visit places in Brno they don’t typically get to see – rare historical monuments or unique projects and private buildings. Domeq became a popular destination as it is a unique coliving project in Brno. 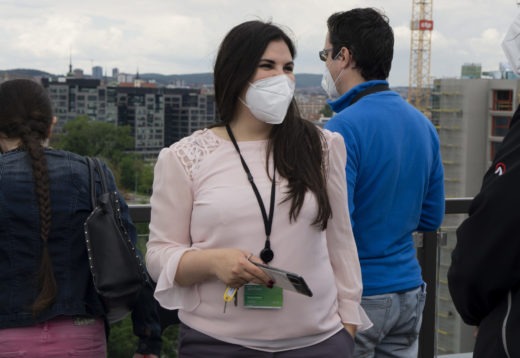 Tour-goers enjoying the view from the upper terrace of Domeq.

A tour of Domeq

Domeq’s property manager Veronika Svobodová welcomed visitors at the reception and took them on a guided tour around the entire building. Almost 100 people came to see what Domeq has to offer.

The tour started in the lobby and included other common spaces (such as the fitness room, study room or laundry room), a presentation of a sample bedroom on one of the upper floors, and a short tour of the building’s two spacious terraces.

The visitors asked a number of questions, including about the price of the rent and services, the nationalities of the tenants, and the commute to other parts of Brno.

Those who have participated in the tour of Domeq particularly enjoyed the incredible view of Brno from the building’s upper terrace. Veronika also told the tour-goers about Domeq II and III which are currently being built and are visible from the terrace as well. These two new Domeqs should offer bigger rooms and target working professionals and managers rather than international students. 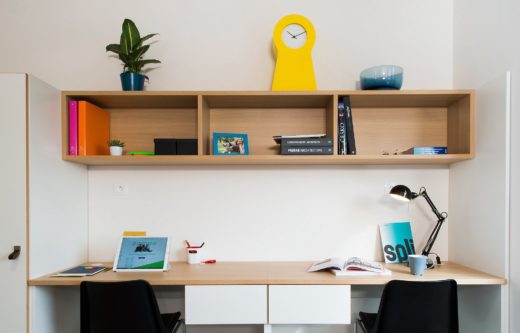 The tour of Domeq also included a sample room on one of the upper floors.

From historical villas to hotel lobbies

According to the creative director of Open House Brno Lucie Pešl Šilerová, among the most popular places of the festival were Richard Herdan’s apartment on Hlinky street, the historical villas in Černá Pole, and a former café with a view in Kohoutovice.

Another popular spot was the former Mahen Theatre power-station designed by Thomas Alva Edison. People were also interested in Šumavská Tower in Žabovřesky, which has recently been renovated. This building used to house the directory of the company Chepos and its top floor offers an incredible view of Brno from the height of 66 metres. 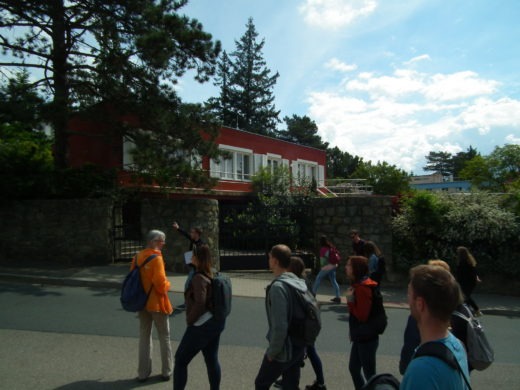 The villas of Brno were also on the programme of Open House Brno.

Science enthusiasts were able to sneak a peek at the International Clinical Research Center of St. Anne’s University Hospital Brno (ICRC) and the Central European Institute of Technology (CEITEC).

Fandament Architects’ DEPO Business Parking in Karlova street was also open to visitors. This large space is intended for mixed use, but mainly for business purposes in order to share ideas and creativity.

Other locations included for example the Community Center for War Veterans on Dobrovského street, the Concert Hall of the Brno Conservatory on tř. Kapt. Jaroše, or the lobby of the hotel Continental.

People were able to register online to ensure they had a spot in the tours. According to one of the organisers Milan Vrbík, those who decided to not come after all were quickly replaced by those who came on the day, so the tours were always filled. 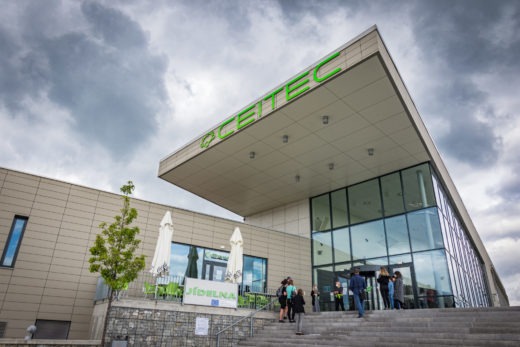 Science enthusiasts were also able to take a peek at CEITEC.

The event was successful and the organisers are happy with how many people showed up. As Pešl Šilerová says, “We are glad to have been able to organize this event in real life again, after last year’s ‘virtual’ edition. We are grateful to all partners who have decided to participate. Our reward is an enthusiastic feedback from visitors, who were happy to see places they typically aren’t able to access.”

The 5th edition of Open House Brno will take place in Spring 2022 and the organisers are hoping that even more locations will join in.

Have you attended this year’s Open House Brno? Which location was your favourite? Did you get to tour Domeq? Tell us all about it in the comments!

We have a very interesting special offer on a number of units at Domeq! If you are interested in living there, visit its website for details.