#LifeInCzechia Moving to a foreign country is already difficult and being a member of a minority can complicate matters even more. If you’re a foreigner who’s also a member of the LGBTQ+ community, you may sometimes feel lonely or even encounter discrimination in Czechia. June is upon us, which means it’s almost pride month. And we’re here to give you a couple of tips on queer-friendly events you definitely don’t want to miss this summer and early fall. 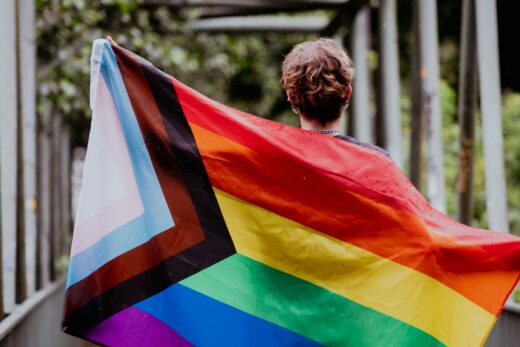 Grab your queer flag of choice and take part in the 2022 Prague Pride March!

When it comes to the attitude of Czech citizens towards queer people, it’s quite hard to say where they stand as a mass. In general, we can say that there is a large generational gap. Czechs below 35 are typically way more tolerant toward the LGBTQ+ community than the older generation. But it depends on the person, of course.

The foundation “Jsme fér – marriage for all” is currently fighting for equal marriage, collecting petition signatures, and communicating with Czech politicians. They recently released a tragicomic documentary about this, The Law of Love, which you can watch here (in Czech only, unfortunately).

As for the law, although we do not yet have equal marriage, same-sex couples can enter into a civil union together. According to the Budapest Business Journal, a Median poll published in January 2020 showed that 67% of Czechs supported same-sex marriage, and 62% supported joint adoption by same-sex couples.

LGBTQ+ people are allowed to serve in the military.

As for trans rights, trans people can undergo surgery and then officially change their gender marker in their documents. They aren’t allowed to do so without the surgery, however.

Although there are some hiccups, the queer community is alive and well in Czechia. There is a myriad of queer and queer-friendly bars, cafés, and community spaces for LGBTQ+ people of all ages. A queer community centre RAINBOW HOUSE was recently opened in Prague on Železná street. Make sure to check it out!

A wonderful week full of cultural events for the queer community and straight allies is coming up in Brno between 13 and 19 June 2022!

You can look forward to fun activities such as speed dating, theatre performances, queer-themed movies, talks and seminars, drag workshops, parties, balls, picnics, events for rainbow families with children and even a beach volleyball tournament.

Those of you who are Christian will be happy to know that they can attend a special queer-friendly church service at Husův Sbor on Botanická organised by the Czechoslovak Hussite Church.

Brno Pride Week is coming up in June!

Living in Prague or eager to visit our capital this summer? Then you’ll be glad to know that Czech Republic’s annual Pride festival & march is back in 2022 after a two-year-long COVID-19 break.

The 12th edition of this joyful festival will take place between 8 and 14 August 2022 in Prague.

The festival will focus on the current situation around queer people in Central and Easters Europe. In addition, Střelecký Island in Prague will fill up with music and food trucks for your entertainment and bellies. Other festival spots include Pride House and Pride Life.

The march itself will then take place on Saturday, 13 August. Grab your rainbow flag of choice and join in! No need to be scared of the haters because the Police always take care of them.

For more details, visit the event’s website and RSVP on Facebook. More information about the program will be coming sooner than you think!

Queer Ball in Prague and Brno

Not really a fan of festivals? Would you like to try something fancier? Attend the Queer Ball! Annual Queer Ball takes place in both Brno and Prague, so you can choose which city is closer to your location and go to that one.

The theme of the ball is “ONCE UPON A TIME”, so break out your fairy tale costumes! The program will include dancing to classic and modern hits, a raffle competition, performances, and other surprises the organisers are yet to reveal.

Would you like to keep up with tips for events in Prague and Brno? Sign up for our newsletter and join our #LifeInCzechia FB group.