It is a truth universally acknowledged that Czech cuisine is quite heavy and fatty, so it can be a shock to a foreigner’s system. However, not all of the traditional Bohemian, Moravian, and Silesian dishes are like that. For example, Czechs tend to enjoy soups, which tend to be a little bit lighter. In this article, we’re going to talk about 5 traditional Czech soups – perfect for the upcoming autumn temperatures.

Although foreign soups have been finding their way here and people have enjoyed them (e.g. minestrone, miso, and ramen), Czech soups still have a special place in our hearts as they are connected to childhood nostalgia and memories of warmth in our bellies during cold days. Typically, soups are eaten here as the starter during lunch, but they can also be a cheaper main course, especially if they’re thick. 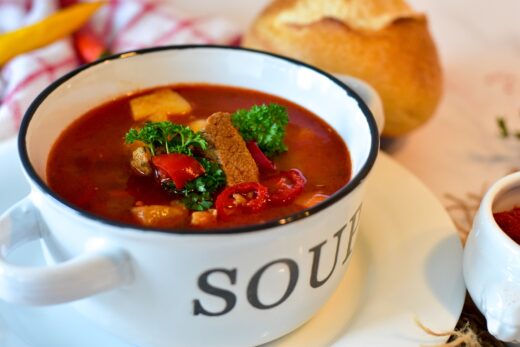 Traditional Czech soups tend to be thick and flavourful.

Potato soup (known as “bramboračka” in Czech) is as traditional as you can get when it comes to Czech soups. The potato is a staple in the Czech Republic and so potato soup is only one of the many potato dishes you can find here, in addition to mash potatoes, potato pancakes, potato dumplings of all shapes and sizes, gnocchi, boiled potatoes, and baked potatoes.

Another vital ingredient in this soup is mushrooms. As is well known, Czechs are a nation of mushroom-pickers, so most families will have a supply of dried forest mushrooms in their pantry. But don’t worry, you can make this delightful soup even with store-bought mushrooms.

You can eat it by itself or with a slice of freshly-baked Czech bread, whatever you’re in the mood for. It’s one of the easiest soups to make! 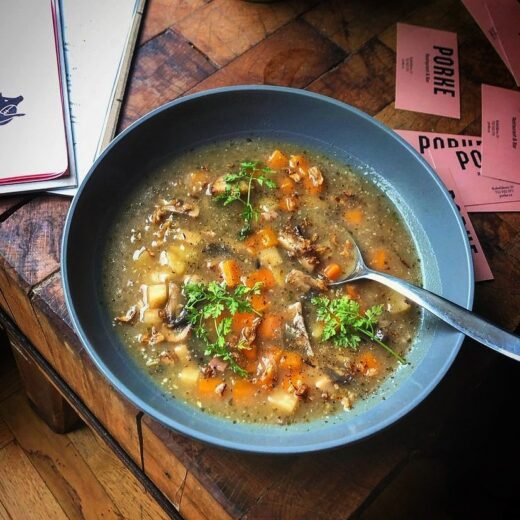 Another soup that screams Czech autumn is lentil soup. Although the Czech Republic is not the only country that has this legume delight in its cuisine (for example, lentil dishes are common in India, as you may know), we put our stamp on it.

For example, there are Czech lentil soup recipes that use lard in them as well as sugar and vinegar to create the unmistakable flavour that makes us think of our grannies.

Other ingredients include onion, carrot, parsley or thyme, bay leaf, celery root, garlic, pepper, salt, and flour. Many Czechs also add smoked meats or sausages, but a vegetarian/vegan version can also be made using smoked tofu or tempeh. 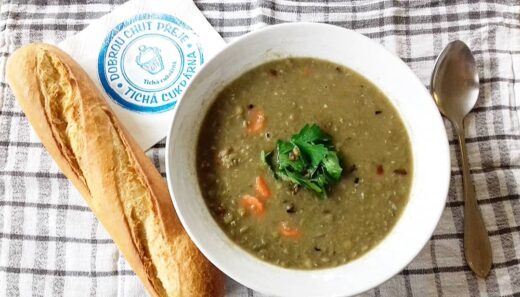 Although goulash is traditionally more of a Hungarian/Albanian dish, goulash soup has been enjoyed by Czechs for a very long time – to the point where we consider it ours.

Goulash soup (gulášová polévka in Czech) is a popular dish to cook on hikes. As a girl scout, I used to make it quite often in the woods or fields with my troop, using real fire and a cauldron instead of a stove and a pot. (Although we would use sausages in place of the mince.)

What gives goulash soup its known brown-orangey-red color is the sweet paprika spice and what gives it its distinctive flavour is the combination of beef mince, garlic, and potatoes. Other ingredients include onion, lard, beef stock, flour, pepper, salt, chili, and oregano. 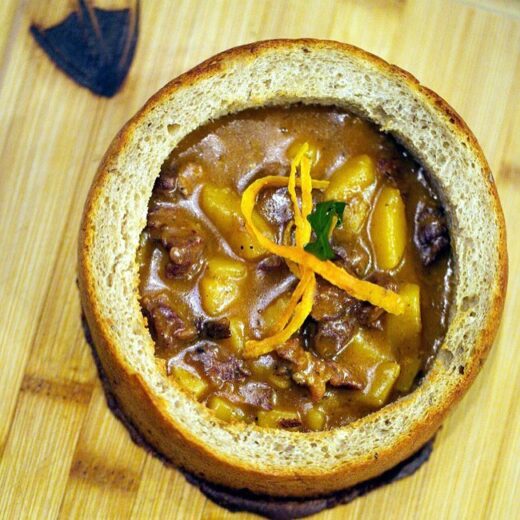 Goulash soup served in a loaf from Potrefena husa in Albertov, Prague.

Traditional Czech cabbage soup (“zelňačka” in Czech) is a very popular dish to eat in cold and muddy weather, so it is also perfect for the autumn season. Cabbage is another popular ingredient in the Czech Republic – after all, it is also a part of the national dish (pork, cabbage, and dumpling).

It can be eaten with bread, but it’s usually so thick you’re fine to eat it on its own. It is also one of the soups that taste better the next day, once it’s been sitting in the pot for a while and all the flavours have properly mixed. 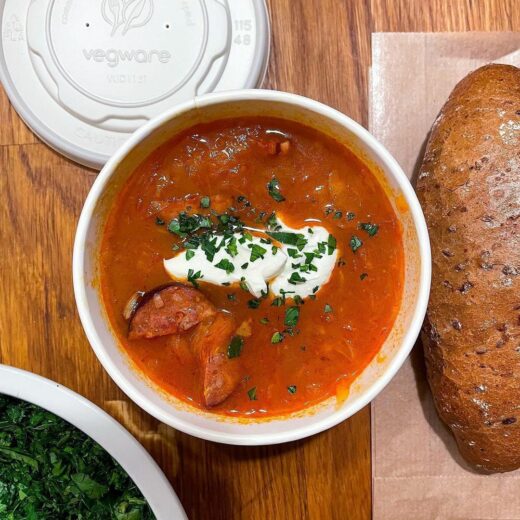 Kulajda – a traditional South Bohemian dish – is probably one of the most peculiar Czech soups. Just looking at the list of the ingredients, it may seem like it cannot taste good. However, people – including our intern Estelle from France – have said that they love it!

According to linguists, the word “kulajda” comes from the Bohemian word “zakudlat”, which means “to mix up”.

Now is the perfect time to have kulajda, because mushrooms and dill are currently in season in Czechia. And it is mushrooms and dill (together with an egg) that are the heroes of this thick and creamy soup. Aside from these ingredients (mushroom, dill, and eggs), you’ll also need vegetable stock, potatoes, heavy cream, allspice, flour, vinegar, bay leaf, salt, and pepper to make kulajda.

Even though this soup may look complicated, as you can see the list isn’t very long and the dish is very easy to make. 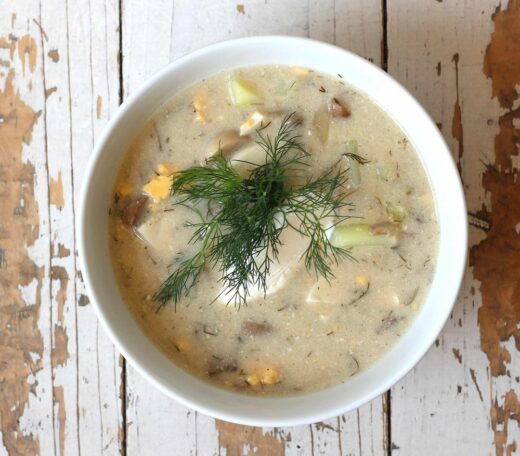 Kulajda from BISTRO FRANZ in Brno. Read our article about it.

Not really into cooking? Eat out!

As you can see from the pictures we included in this article, Czech restaurants and bistros always have soups on their menu and they often focus on traditional Czech soups. Special soup establishments are also popular and super trendy lately.

Want to know more about food in the Czech Republic? Explore our Food & Drink tag and let us know in the comments what is the next Czech dish you’re going to cook!