Halloween is probably one of the most mysterious and scary holidays in the world. Do you celebrate it in your country? Do you know that in the Czech Republic we have a different holiday similar to Halloween? We would like to tell you more about the history of this Czech holiday that falls on November 2 and share some suggestions on how you could enjoy Halloween vibes during this unusual coronavirus time.

Even if Halloween is not celebrated in your country, I believe most people know about this magical day of October 31. Thanks to globalization, nowadays, this holiday is known around the West and the East world as well. It’s popular not only in America but also in Australia and even Japan. Of course, in each country, there is some diversity between traditions. For example, in Ireland, it is customary to arrange fireworks and bonfires. In Japan, annual parades are held in honor of the holiday, sometimes reaching a huge number of participants. 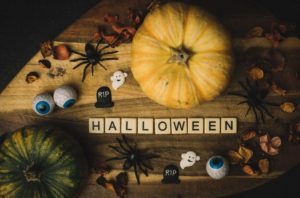 Did you know the history of Halloween?

So, what does Halloween mean? According to old legends, before the end of the year, in the middle of the autumn season, the boundaries between the world of the dead and our world are washed away, and the souls of the dead can visit our reality. Halloween is widely considered as an American holiday, but the concept of this event is rooted in the history of the ancient Celts of Ireland and Scotland. Some historians even believe that they celebrated this day as the beginning of the new year and called this day Samhain. Samhain was marked as the end of one harvest season and the beginning of another.

However, Halloween is not widely celebrated in the Czech Republic. It is more the young generation of children in kindergartens who go for the festivities.  We have the feast called the Memorial of the Dead, this holiday is known as Dušičky. Dušičky is celebrated the day after the Feast of All Saints, November 2. Does this holiday have anything similar to Halloween?

It is the time when people visit cemeteries, cook specific food for this day and remember the beloved people who passed away. There are some elements that Dušičky has in common with Halloween because Dušičky originated also in the ancient Celts’ traditions that were celebrating Samhain.

During these days people in the Czech Republic bake bread in the shape of bones, which were intended for poor people and beggars at the church. In the past, there was a tradition in the South of Bohemia to go begging for this pastry. Similarly to American people, especially kids like to dress in scary costumes and go trick-or-treating to neighbors, which is more similar to our Christmas traditions. But according to the Christian traditions, the most important thing to do during these days is to go to the cemetery and lay candles and flowers on the graves of your loved ones who passed away to pay them respect. 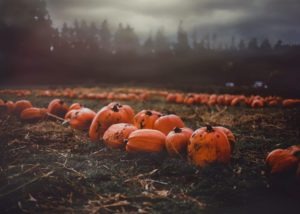 Decorate your home with orange pumpkins!

It was believed that on the night from October 31 to November 1, the souls of the dead were returning home, because on this night they would be the guests in the house, they used to live. That’s why the living host had to prepare food and the place for the dead soul if they wanted their dear deceased to pay a visit to them. But after the night was finishing they were seeking the help of relatives to return to the land of the dead. To keep the ghosts from getting lost, people lit the candle inside of hollowed-out beets, instead of which pumpkins were later used. Another recommended tradition is to drink cold milk to cool the unfortunate souls. Some dishes were even thrown into the fire, to redeem the living for their sins. The sound of the church bell in the morning then was a signal for the soul to return back to the land of the dead.

Nowadays you can enjoy visiting beautiful markets decorated with all symbols of Halloween and Dušičky in the Czech Republic. They are decorated with, for example, bright orange pumpkins, which are known from Irish legends as Jack, candles, autumn leaves, lights, and many others. Also usually during the end of October, there are many cool parties and festivals dedicated to these holidays. Unfortunately, this year it’s difficult to predict if these markets and events will take place or not due to coronavirus restrictions.

So, how to create and enjoy the magical Halloween atmosphere at home? 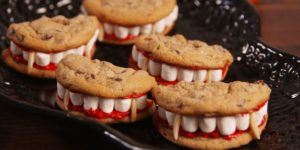 Cook something interesting at home!

Never mind that you can’t go to parties and wear incredible costumes. You can always enjoy preparing the costumes for the next year or just having fun dressing up this year with the family or your flatmates.

I believe that we will adapt to the rules of this year and will enjoy these days despite everything.
Are you interested in more tips on how to make your home cozier not only in autumn? Read here.

"As I am also an expat in the Czech Republic so I know and understand well how hard it is to adapt to a new environment. Therefore, I am here for you to share my experience, and I do my best to help you.