Beroun is a small and cozy provincial town with Czech typical modern buildings and a historic city center. The city is located in a picturesque hilly area on the border of protected natural areas, surrounded by castles and other beautiful monuments of history and culture, which makes it a popular tourist destination. 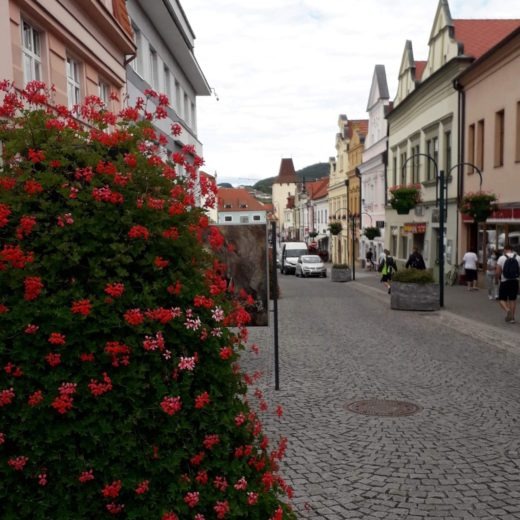 The status of the city was granted by Charles IV in the 13th century. Despite its small size, the city has many attractions, historical and cultural monuments, and interesting architecture.

Husovo Square is a historic city center. It was built in the 13-14th centuries and till today it preserves the remains of fortress walls in early Gothic style, city gates, and some old buildings. Here you can find many restaurants with local and international cuisine, coffee places, and local shops. Sometimes farmers from the nearby villages organize here very nice festivals where they sell fresh home-made bakeries, fruits, and vegetables.

Near central Husovo Square,  you can find most of the attractions of the city such as the Baroque town hall, the main church, and the city gates.

There are twin towers bordering the Husovo Square from opposite sides, named Pilsen and Prague Gates. A long time ago, Beroun and those towers served as a city gate and a road from Prague to Pilsen. Today, the arched passages of both gates are pedestrian roads. The inner sides of the gates are decorated with paintings and an impressive clock.

Until 1972, there was a caretaker’s apartment on the top of the western Pilsen Gate (Plzeňská brána). Today it serves as a part of an exhibition of the history of the city. In the eastern Prague Gate (Pražská brána) you can find a photo gallery. 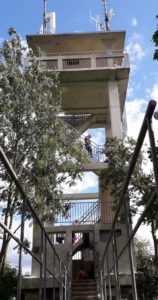 The lookout tower, about 14 meters high, is located in a wooded park and provides a beautiful view of the city. The tower with an open observation deck was built in 1939 and subsequently renovated in 1999. Since then, this is a favorite place for families of citizens. The view from its top overlooks a unique panorama of Beroun and the surrounding villages! The panorama opens on the small historical part of the city with quarters of the modern cottages and beautiful nature such as hills and plains that stretch across the horizon.

The bear garden (Medvarium) is Beroun’s main attraction. It is located near the observation tower (which is around a 10-minute walk from Husovo Square or a 15-minutes walk from the main station). The bears’ names are Jakub, Vojta, and Matei. They were born in January 2000 at the Český Krumlov Zoo. The bears are very popular in the Czech Republic as they were filmed in movies for children. When they grew up, the bears were moved to Beroun. They became a symbol of the city, and a picture of a bear is depicted its flag. Unfortunately, Vojta died in 2016 and today only two bears live in the aviary – Jakub and Matei.

The medvarium is the favorite destination among families with kids to spend weekends. There is also a nice park, kid’s playground, and a sweet stall next to the medvarium.

How can you get there?

The small Beroun, which retains the charm of the historical medieval center, is perfect for a Sunday outing from Prague. Although it’s unlikely to stay longer than one day, Beroun can be an interesting transit spot to the Karlstejn Castle.

Are you planning to move to the Czech Republic permanently? Do you have some immigration questions or you are looking for an apartment to stay here? Foreigners are here to help you with your questions www.foreigners.cz!