Prague is a wonderful city with plenty of activities to do but it is also surrounded by many other beautiful places worth a visit any time of the year. Some of them are achievable in one day even: the towns of Kutná Hora and Český Krumlov.

Kutná Hora is listed in the UNESCO world heritage. Considering its history, it is not hard to believe that. In the Middle Ages, thanks to its rich silver mines, the Royal Mint was located in the city, making the town the second most important one in the Kingdom of Bohemia, just right after Prague.
The history of these silver mines which were started by German immigrants can be discovered in the local museum, surely a place to visit in your to-do list. You can also go to see the Saint Barbara church, one the most famous gothic cathedral in central Europe. 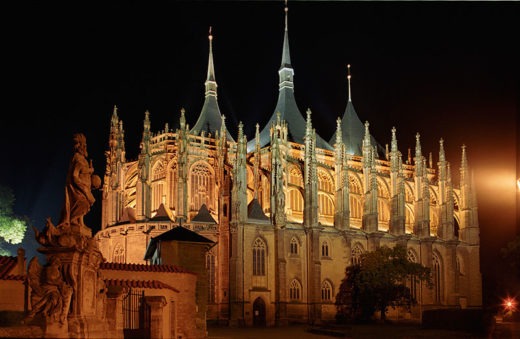 At night the Saint Barbara church is even more majestic!

After that, don’t forget to check another must: the Sedlec abbey, a chapel that from the outside may look like a regular small gothic church but inside keeps something absolutely impressive an ossuary made out of between 40.000/70.000 people’s skeletons. The bones have been used as raw material for the chapel’s decor inside of the chapel, including chandeliers, candelabras and the skull candle holder, plus there are six pyramids made of the bones. 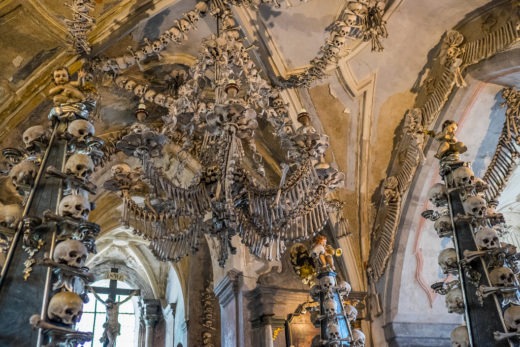 The Sedlec ossuary: you will not find anything like this anywhere in the world!

The reasons behind this craftwork dig deep in the history. First, the abundance of human skeletons depends on what happened in the 13th century. Back then, an abbot went to Jerusalem and brought back a handful of soil from the Golgotha, the Grave of the Lord. He scattered this holy soil across the cemetery and after that, of course, everybody wanted to be buried there. That, plus the coming of the black plague, filled the cemetery at a point where there wasn’t any space left. To solve that problem the bodies were moved to a crypt, and that kept going for centuries, until in 1870, František Rint, a local woodcarver, was employed by the Schwarzenberg (the ruling family at the time) to put the bone heaps into order, yielding to the impressive, yet macabre, result.

Nowadays, it may be hard to understand the reasons behind those actions, but that’s due to a cultural shift: now someone can view it as creepy, but not long time ago it was a way to remember a deeply felt religious principle: memento mori, remember that you will die. It was supposed to make people view the life from a wider perspective and, in a certain way, to put at ease with everyday struggles that are just momentary; and also, to warn people into focusing about the really important things, like the afterlife.
If you like the idea of visiting that city taking a train is a good option. It will bring you to the destination in 60 minutes; a direct train leaves the Prague main train station regularly.

Another interesting destination for a one day trip from Prague is definitely Český Krumlov which is often nicknamed the mini Prague. The town lies in south Bohemia and belongs to the UNESCO World Heritage site as well. 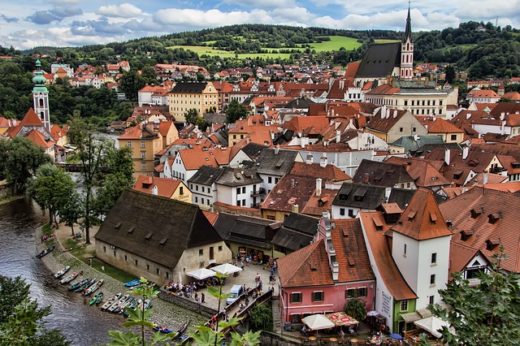 The first settlement date back to the 11th century. The city kept growing through the Middle Ages. Between the 14th and 16th centuries it reached its splendor: most of its historic architecture was built in that time. The castle and the old town are built mainly in Gothic, Renaissance, and Baroque styles. The core of the old town is within a horseshoe bend of the river, instead, the old castle (which is the second largest in the Czech Republic) is on the other side of the Vltava river which can be floated down on a boat during summer.

The castle consists of a complex of forty buildings and palaces, situated around five castle courts and a castle park spanning an area of seven hectares. Its development started in the 12th century and lasted almost four hundred years when in the late 16th century it acquired its nowadays dimension and its baroque style.

An impressive theatre that can be found inside was built during that period and share the same baroque style. It’s one of the few court theaters in the world that still retain the original stage machinery and to preserve such equipment only two shows are performed every year but being able to see a baroque opera on such perfect stage is sure worth the waiting. During the whole year is possible to take a tour under the stage, to look at the stage machinery and its complex system of ropes and pulleys. 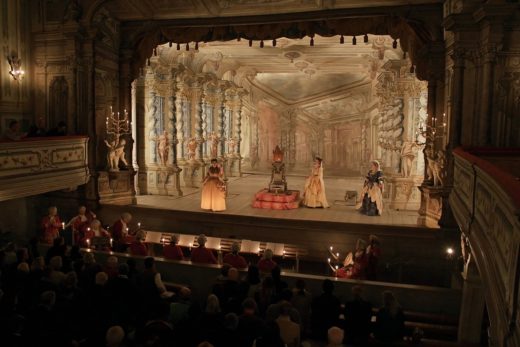 The baroque theatre inside the castle

Another interesting place in Český Krumlov is the Egon Schiele museum, dedicated to the famous Austrian artist indeed lived there in 1912. Český Krumlov was his mother birthplace and he moved to the town in order to escape from Vienna, a city that had become unbearable for him, and found the inspiration again.
The museum is opened every day from 10.00am to 6.00pm and, in addition to the permanent exhibition of the Expressionist painter, also hosts regularly the works of other contemporary artists. 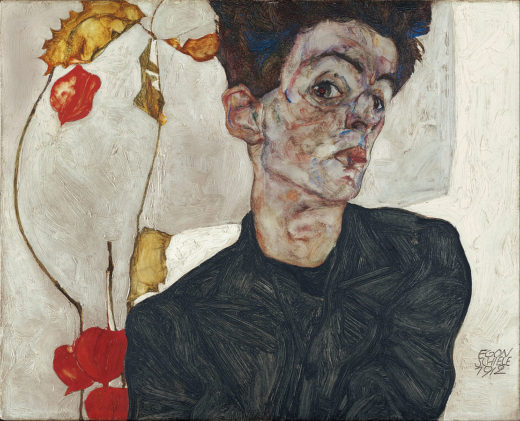 If you want to reach the city without using a car your best option is to take a bus: Regiojet and Flixbus both operate in that route and, from Prague, it will take you approximately 3 hours to reach the destination.

Some more ideas for a nice trip to make in the Czech Republic can also be found in this article!

Always remember that if you get tired of using trains and buses and, instead, you decide to travel by car, you can check our driving licence service and be able to sustain the exam in English!