As the title suggests, I’m here to describe to you some unfortunate yet one-of-a-kind snapshots to brighten up your day, while you’re on the requested quarantine.

A long time ago (last October), when borders were open and epidemics were bed-time stories narrated by grandmas, my friend Maria and I (nowadays we prefer to be called Mareya’s duo but that’s another story) decided to go on an adventure in Croatia for two weeks. It was a voluntary program in a shipyard and one of my most beloved memories so far. 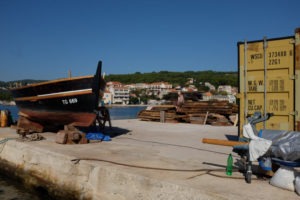 So the program was taking place in Sumartin, a small village in Brač Island, on the coastline of Croatia. After a whole day on the road, several transport means, coffee breaks, and bakery snacks, somehow we managed to get there.

The view, we were confronted with, was enough to take our fatigue away in the snap of our fingers. 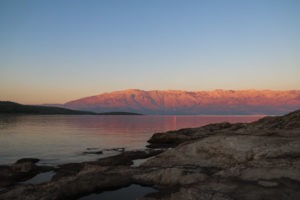 A couple of days have passed by with us working on the shipyard, under the Croatian noon sun with the guidance of the all-mighty Mike, sunbathing afterward on the beach and swimming in the crystal-clear water. 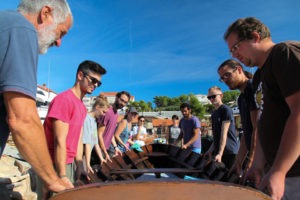 Another day on the shipyard (Ania Nicto)

Our nights were another story. Gatherings on the football field to sum up our day and talk about our feelings in a psychotherapy kind of circle with Eddie as our leader and then running down the rocky path to head to the beach, having as a guide only the starry night.

One of those nights, probably the second or third day, I wasn’t feeling so well and I thought it would be better if I just joined the others just for a while and then head back to my room to sleep.

Well, you guessed it right! Things didn’t go as planned and all because of Rakija!!!

I wasn’t even in the mood for drinks that night, but when you challenge a Greek, they have to do it no matter what. So several rakija shots later, combined with some local beer, Mareya was on cloud nine, without a sore throat anymore. To be honest, at that point, I couldn’t even tell if I had a throat, to begin with.

In the meantime, Luca and Fernando were exchanging the guitar, providing us with wonderful Spanish/Italian music, while Aurora and Kendal were singing. Guys, I still have “La Flaca” in my mind!!

The night was young and we made the most of it. Drank a lot, danced a lot, laughed even more. At some point, we decided to go back to our rooms. After all, the next day we had to attend the shipyard again.

And that’s when rakija hit me big time!!!

You know, most people when they get back home they wash their hands (especially now, even the dirtiest among us). Well in my case… I washed my phone instead. And when I start something I do it right! So I washed it REALLY WELL.

Then I got out of the bathroom, looked at Maria, looked back at my phone and said “Maria, I think my phone broke down. I, I just washed it”. And then we burst into tears from laughing like there’s no tomorrow.

My phone didn’t make it, even though I had it soaked in a bowl of rice for two weeks (it doesn’t work in extreme cases, I guess).

The lessons I got from this experience are that you should never mix rakija with phones, that once in a while taking a social media break is necessary to live your life to the fullest and that manipulating my sister into thinking that “Rakija” is a girl who got drunk and destroyed my phone is pretty easy. 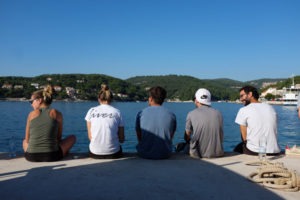 We all lived in the village Sumartin (Ania Nicto)

Stay tuned for part 2, but in the meanwhile, you can check my latest article about “what it’s like to be a Greek”.

2 thoughts on “A Series of Unfortunate Events when Traveling: Part 1, Rakija”