Karlovy Vary is one of the most beautiful places in the heart of Europe and the most visited spa resort in the Czech Republic. Thousands of people visit this town every year for health improvement, visiting local attractions, or simply for a romantic tour.

Along with Prague, Karlovy Vary is one of the most popular Czech spa towns among tourists. Why is Karlovy Vary so popular? One of the main reasons is the rich history of the city and the diversity of the local nature.

Karlovy Vary is located in the west of the Bohemia region, in the valley of the river with the tender name of Tepla. The city was founded in 1358 by the great Czech king Charles IV, after whom it was named Karlovy Vary or Karlsbad (from the ancient German “Karl’s bath”).

King Charles IV enjoyed hunting for bears and the beautiful surrounding nature. One of his favorite places for hunting was a valley where today’s Karlovy Vary is located. He was amazed by the forests that surrounded the valley, as well as the river with gushing hot springs. Later it was discovered that these springs have healing properties, and the king decided to organize a settlement here, which later became the most popular resort.

There are 13 healing springs, which are similar in composition but have different levels of carbon dioxide and temperatures. There is a joke coming from this area that there is another healing source in Karlovy Vary – the Czech alcoholic drink Becherovka.

The Karlovy Vary springs are good for people with weak livers or biliary tract, as well as for metabolic diseases (diabetes, obesity), and so on. Furthermore, the mineral springs of Karlovy Vary are used for both medicinal and prophylactic purposes.

The architecture of Karlovy Vary deserves special attention. The city is located on the Tepla River and has numerous small bridges for pedestrians. The city also has many beautiful parks, squares, and buildings dating back to different eras. If you look closely, you will notice that all the houses in Karlovy Vary are painted with warm colors of different tones, which gives the city a special charm and a sense of comfort.

The main attractions of the city are, of course, its colonnades, and each of them has a special name, Sadovaya, Market, Melnichnaya, Vrzhidelny, Zamkovaya. They provide healing springs to the visitors of the city at any time of the year. 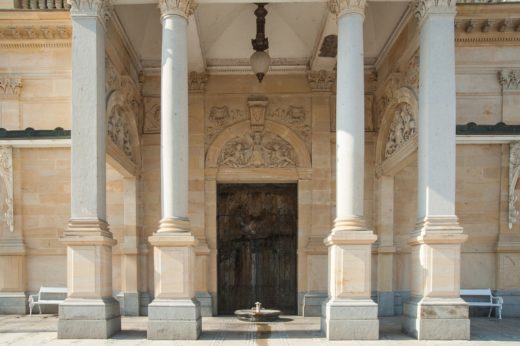 The most amazing architectural monument in Karlovy Vary is Renaissance Mlyn Colonnade. It was built between 1871-1881 and you can find five mineral springs here. 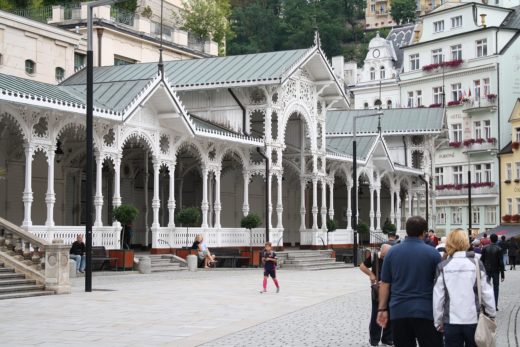 This Neoclassical colonnade (the only one in the city made entirely of wood) appeared in Karlovy Vary in the 1880s as a result of the works of the legendary Viennese architecture firm Fellner & Helmer.

The famous Diana observation tower, built in 1914, is located on the top of the Friendship Hill. If you are in good physical shape, you can try to walk up along the forest paths. The most convenient time for these hikes is spring, early summer, and autumn.

Another option is to take a special funicular that leaves from Karlovy Vary every 15 minutes and goes up for about 3 minutes. There is a restaurant and a mini-zoo nearby. The Diana Lookout Tower is considered to be one of the main attractions of Karlovy Vary. 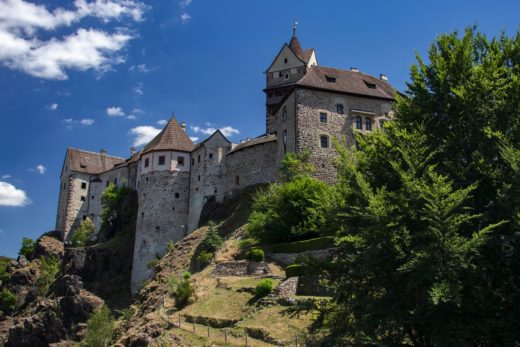 Just 13 kilometers from the center of Karlovy Vary is the quaint town of Loket with its main tourist attraction in the form of a magnificent ancient castle from the 12th century, located above the settlement. Loket Castle is perfectly preserved and has undergone very few changes since its construction.

Its thick stone walls, used as a prison in the 18th and 20th centuries, earned Loket the reputation of being the most impregnable fortress in the Czech Republic. 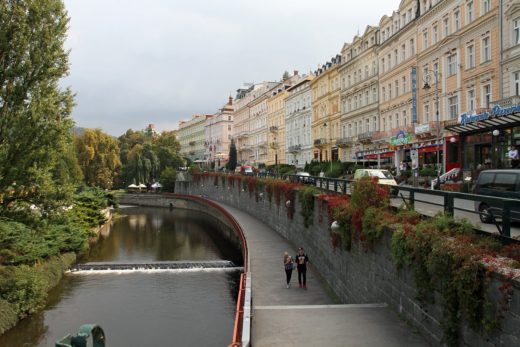 Stara Louka is considered to be the central and most picturesque street of Karlovy Vary: old townhouses on the northern bank of the Tepla River, surrounded by the evergreen hills of the Slavkov Forest, will impress any tourist.

Cozy cafes and restaurants are lined up along the street. This is the ideal place for relaxing walks on weekends and chatting on one of the riverside terraces over a cup of aromatic coffee. Vitezslav Nezval Theater is located on the opposite bank of the river.

The most famous and most visited point among the places of observation is the observation deck Jeleni Skok Rock. It is popular as the foundation of the city of Karlovy Vary came from here. Here it was the first time when one of the dogs of Emperor Charles evidently champed into the hot spring. 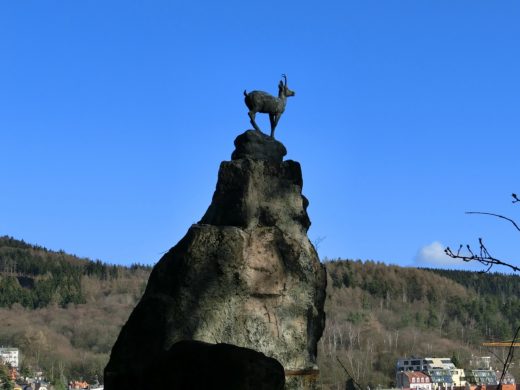 One of the most frequently visited places by tourists in Karlovy Vary is the Moser Museum, located at the glassworks of the same name. This factory is considered to be the best and most famous in the world for the production of crystal glass products. The products of the Moser plant are an excellent souvenir.

The main reason for the year-round guests to Karlovy Vary was and still is the desire to taste the healing mineral waters gushing from the bowels of the local springs. The whole point of spa treatment in Karlovy Vary is originally based on the healing properties of geysers.

Chemical analysis shows that Karlovy Vary water contains more than 50 substances, including calcium, sodium, iron, and many other elements necessary for the body. People with a wide variety of ailments come to Karlovy Vary, knowing about the healing properties of the water in the springs, and receive tangible benefits.

There are currently 13 active healing springs with mineral water in Karlovy Vary, which differ from each other in temperature and carbon dioxide content.

The cultural life in Karlovy Vary does not stand never stops. In order to diversify the resort vacation, the city hosts various cultural events, festivals, concerts, and competitions every year. Unfortunately, in 2020 due to the pandemic, most of the festivals are postponed to 2021.

In June, Karlovy Vary gave a unique competition called The Mattoni Karlovy Vary Half Marathon which has been held in Karlovy Vary since 2013, and about 4000 people take part in it every year. Traditionally, the race starts in the evening at 18:00 and ends with a runner’s party and a music festival. On the day of the start, travel in public transport for the participants of the race is free at certain hours – it is enough to present your start number. Due to the pandemic, a new date has been set. It will be held on Saturday, 24 October. For more information check out the official website.

The highlight of September in Karlovy Vary is Karlovy Vary International Folklore Festival. During this festival, you can enjoy the performances, songs, and dances of different representatives coming from 23 countries. In 2020, the festival will take place on Wednesday 9 September 2020. For more information, visit the official website.

In December, the city begins preparations for the main holidays of the year, which are Christmas and the New Year. Locals are especially sensitive to Catholic Christmas (Vanoce), which is celebrated on the night of December 24-25. Houses in Karlovy Vary are decorated with festive decorations and garlands, everything around sparkles like in a fairy tale.

There are hundreds of interesting trip opportunities in Karlovy Vary, but a leisurely walk around the city can be much more interesting. Many people say that the city has a fabulous atmosphere, which is made up of colorful houses, bridges across the river, narrow streets, long squares, beautiful crockery shops, flowering trees, and much more. 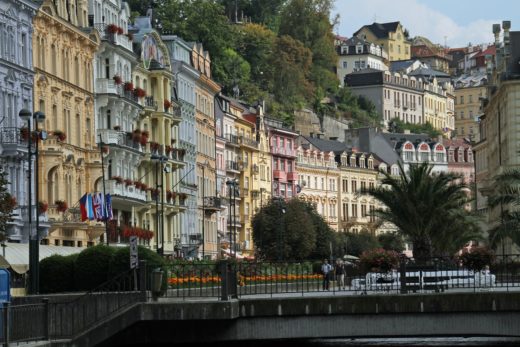 How to get there:

Do you need to help to organizing your long-term stay in the Czech Republic permanently? Do you have any immigration questions or you are looking for an apartment to stay here? Foreigners are here to help!

Source of the photos: https://pixabay.com/ru/