Prague is known as one of the most gorgeous capitals around the world. And if you decide to visit Czechia, we have great news for you! Our rather small country is literally strewn with beautiful towns and villages, equally fascinating and magical as their capital. The pearl among them, without a doubt, is the town of Český Krumlov. It is located in the South Bohemian Region on the bend of Vltava River. No matter how many times you come there, you still experience fresh and vivid feelings, as if you were in a fairy tale.

The view of Český Krumlov

The town has never been affected by any war, natural disasters, or industrialization. It managed to preserve its original appearance for several centuries. The magnificent Krumlov Castle is the main spotlight of Krumlov and one of the UNESCO monuments. In addition to Krumlov Castle, there are more than 300 buildings with a unique and exciting history located in the historical center of the town. 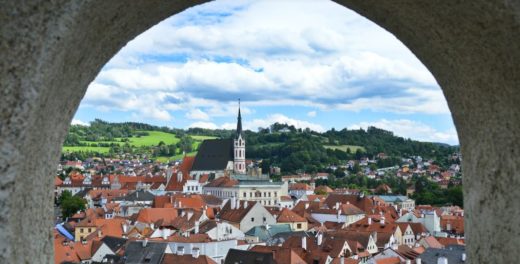 The main attraction of Český Krumlov is the Krumlov Castle. According to a legend, the first stone of the castle was laid by Vítek II senior. The castle was first mentioned in written sources in 1240. Over the past eight centuries, most of the sights have been restored more than once, and their appearance changed depending on the era. Today the architectural appearance of the Krumlov Castle captures some features of the Renaissance and Viennese Baroque.

The most famous part of the castle is the Baroque theatre, which is one of the first in Europe, and therefore it now belongs to the monuments of world importance. Nowadays, the theatre functions as a museum. Here you can see a unique stage in the style of Baroque, costumes and decorations, and most importantly, the preserved paintings on the dome of the hall with gods and mythical animals.

The landscape of Český Krumlov

The Church of St. Vitus in Český Krumlov is located in the Latran district. It is a bright, brick-colored building, which is hard not to notice. Every Sunday service is held in the church, which is accessible to the general public.

The Church of St. Vitus

Locals organize various festivals in Český Krumlov, especially during summertime. In June every year, there is a Five-Petalled Rose Celebrations. The rose was the symbol of the Rozhemberk dynasty and today it is the emblem of the town. During this three-day festival, Český Krumlov returns to the Renaissance times. The streets and squares are filled with the noise of knightly tournaments, historical craft fairs, feasts, and the sounds of medieval music. The celebration culminates in a costumed parade with the participation of equestrian knights and many famous people associated with the history of the town. The knightly tournament, chess with living figures on a giant chessboard, and festive fireworks over the town are the main attributes of these days. Alternatively, at the end of July or beginning of August, you can attend the International Music Festival, which is an open-air concert held in the town for about three weeks and closed with a big firework. 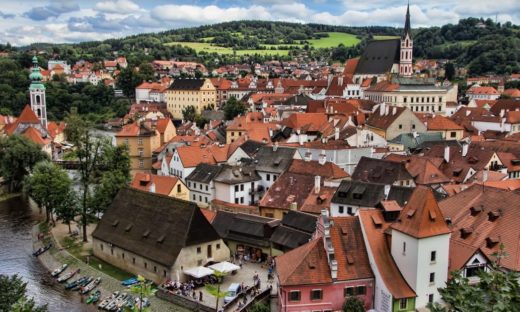 How to get to Český Krumlov from Prague?

The distance between Prague and Český Krumlov is about 140 km and the most convenient way to travel is by bus, which is about 2.5 hours. There are different transport companies that can take you to Český Krumlov from the station Florence in Prague.

Český Krumlov is a small town, so one day is more than enough to slowly explore it. Additionally, on the way from Prague to Český Krumlov, you can stop to visit one of the most beautiful castles in Europe – Hluboka Castle.

Are you planning to move to the  Czech Republic permanently? Do you have any immigration questions or you are looking for an apartment to stay here? Foreigners are here to help!

Source of the images: Pixabay.com