#LifeInCzechia Christmas is upon us and even though the majority of Czechs is irreligious and doesn’t go to church, we sure do love our Christmas traditions. In this article you’ll learn about how we celebrate Advent, get some tips on where to attend Midnight Mass on Christmas Eve in your city, and finally find out who is Ježíšek and how can a small baby deliver all these presents anyway? 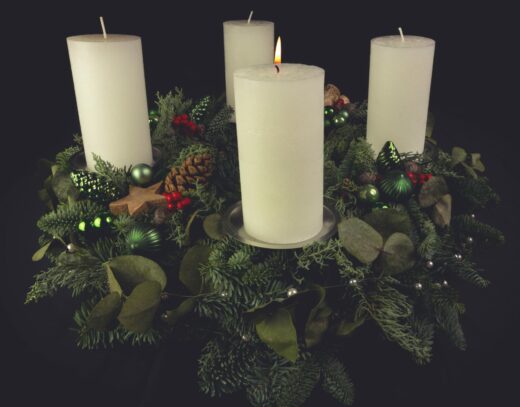 Advent wreath with its first candle lit on the first Advent Sunday.

Although the vast (78%) majority of Czech citizens are irreligious, we sure like to keep all kinds of traditions when it comes to Christmas. This starts exactly 4 Sundays before Christmas Eve (24 December) with the beginning of Advent.

On First Advent Sunday, Czechs light the first candle on a special Advent wreath made of boughs of spruce or fir and decorated with ribbons and Christmas ornaments. Each following Sunday, we light another candle until they’re all burning on Christmas Eve.

The traditional colour of Advent is purple to echo the color of a priest’s robe, so you’ll typically see the wreaths decorated with purple ribbons.

If you want to join in, you can either make your own wreath or you can by a ready-made one. They are sold in most flower shops.

Again, Czechs are not awfully religious. Still, many of us enjoy the atmosphere of a decorated church on Christmas. Even people who don’t normally set foot in a church all year long can decide to attend Midnight Mass on Christmas Eve (24 December).

The churches have a great atmosphere on Christmas Masses and there’s also a lot of carol singing. Because they are so popular, churches are usually full, so make sure to come early!

Want to attend Midnight Mass but are not sure which church to choose in your city? Here are some tips from us:

Who the heck is Ježíšek?

If you come from a country that’s not Slavic, you might become really confused when people start talking about writing a letter to Ježíšek (or “Baby Jesus”) before Christmas.

Yes, in the Czech Republic, little magical baby brings our presents. And nobody really knows what he looks like. Some imagine Ježíšek as an actual baby Jesus as you know him from nativity scenes. But there are also popular interpretations of him as a toddler resembling a small baroque angel.

Baby Jesus doesn’t come into your home through the chimney like Santa does. He is said to come in through the window on Christmas Eve (24 December). He places the presents under the Christmas tree and before he leaves, he rings a little bell, signaling to the family that they can come into the room.

How can a little baby carry so many presents? Well, since he’s a god, he’s obviously magical, so you don’t need to worry about answering this question.

And what happened to Santa? Well, we don’t really know much about Santa or Father Christmas unless we watch Western Christmas movies. But if you’re missing a Santa element in Czechia, make sure to keep your eyes peeled on the eve of 5 December! That’s when St. Nicholas with his trusty friends devil and angel go round people’s houses, asking children if they’ve been good.