#LifeInCzechia As the locals frequently say, Brno isn’t a city, Brno is a lifestyle. And that goes for our art as well. People often joke that all the art that has been rejected in other Czech cities as too peculiar or outlandish ends up in Brno. Whether it’s true or not, the city really is full of unique sculptures and art installations that are definitely selfie-worthy and Instagram-ready. Here are 5 of our favourites and we’d love to know yours! 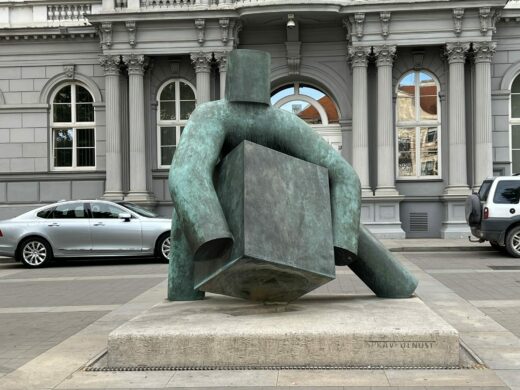 The weight of justice in front of the Administrative Court

Anyone who’s ever been to Brno knows about our counterpart to Prague’s astronomical clock, situated on Náměstí Svobody. People have likened it to male privates or sex toys, but it is actually supposed to represent a gun projectile in commemoration of the 16th century’s occupation of Brno by the Swedes. Who would have thunk it?!

Every day at 11 o’clock, the sculpture releases a special marble to symbolise defence, peace, and the passing of time.

The clock was erected in the square in 2010 and instantaneously became a controversy. While many people have complained about it, it has nevertheless become one of the symbols of Brno, proudly standing in the main square and representing Brno’s uniqueness. 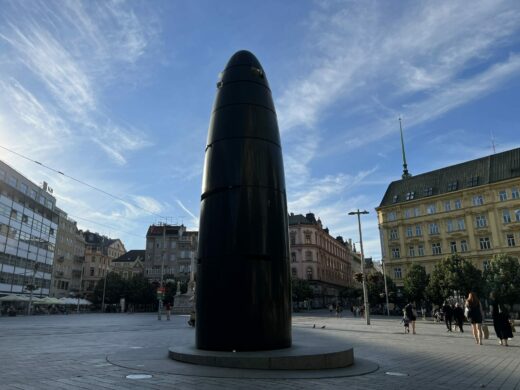 Are you a fan of classical music? If the answer’s yes, then make sure to go to the Cabbage Market and look up. Right in front of Reduta Theatre, you’ll see a long column with a statue of tiny Wolfgang Amadeus Mozart on top.

The statue isn’t just your old regular statue of Mozart, however. The figure actually has an adult head while the rest of his body is around 11 years old. He has one tiny wing and is standing on a piano.

The reason why this Mozart is 11 years old isn’t hard to guess – the composer actually visited Brno in 1767 when he was eleven to spend Christmas here with his father Leopold and sister Nannerl. 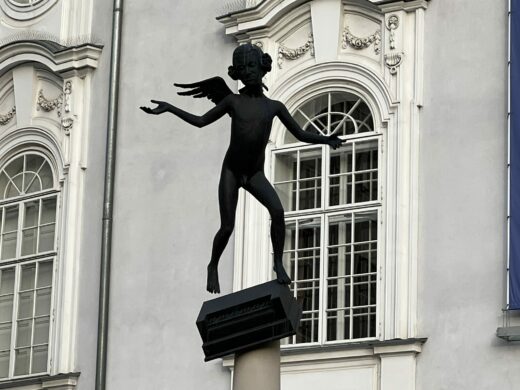 3. A tribute to Edison

This popular sculpture of 4 lightbulbs made of wire in Malinovského náměstí is supposed to commemorate the event of Mahen Theatre becoming the first electrified theatre in Europe. According to Gotobrno, T. A. Edison himself came to Brno to check on the theatre in 1911.

If you look closely, two of the lightbulbs look like the original lightbulbs designed by Edison, while the two other ones look more like the lightbulbs in the actual theatre. The wires are supposed to represent the electric networks and also serve as a metaphor for communication.

In reality, every time you pass this piece of art, you’ll see tiny children climbing on top of it – and who could blame them when it looks like a monkey bar!? 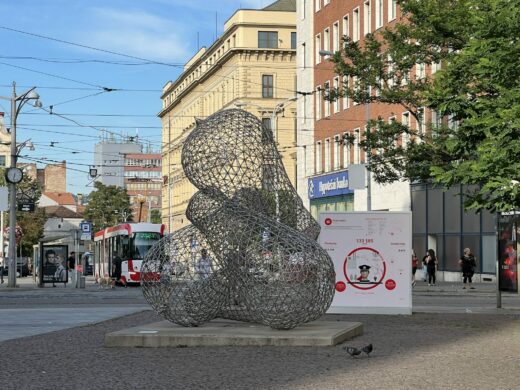 This next peculiar sculpture/fountain was made in 2010 and is situated in front of the Supreme Administrative Court of the Czech Republic at Moravské náměstí. It often confuses passers-by as nobody really knows what it’s supposed to represent. Locals jokingly call it “a distrainer carrying a washer”. But actually, the heavy box the figure is trying to lift up is supposed to represent the weight of justice. Hence its placement in front of the court building.

The art piece was made by the sculptor Marius Kotrba and is inspired by justice itself, which is one of the items on Plato’s list of 4 cardinal virtues (justice, bravery, temperance and prudence). 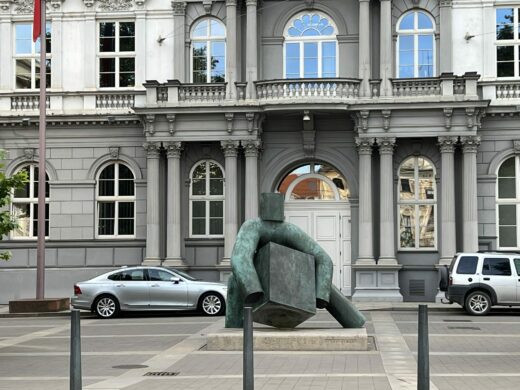 A man with a heavy box symbolising justice

The year 2010 wasn’t the only year in which weird statues were placed in Brno. In 2015, the sculptor Jaroslav Róna built a giant statue of Margrave Jobst (Jošt) of Luxembourg sitting on his horse in front of the Moravian Gallery. The statue is stylized, so the horse has very long legs, which is why the locals have been calling it “a giraffe”.

Jošt is an extremely important historical figure in connection with Brno. He was the nephew of the legendary king Charles IV. In 1410, he even became the Holy Roman Emperor and was planning on reigning over the empire from the city of Brno and its castle Špilberk. Sadly, he died just a few weeks thereafter and so the capital stayed in Prague.

This statue is supposed to represent another item on Plato’s list of virtues – this time bravery.

And here’s a little pro-tip: If you want to take a funny picture of the horse, make sure to stand behind it and then walk slowly forward underneath and then look up. You’re welcome. 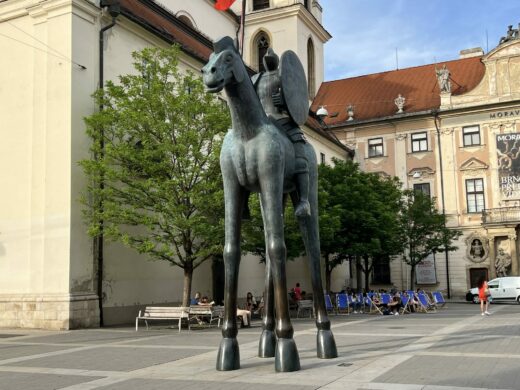 Equestrian statue of Jošt in front of the Moravian Gallery

Now here’s an important question – what is your favourite piece of peculiar art in Brno? Because as you know, there are many more! Share in the comments!

Interested in more tips about Brno? Sign up for our newsletter and you’ll get a weekly email for expats and a special monthly email for Brno expats with interesting information, important news and tips on what to do in the city.

In the meantime, follow us on our social media at Foreigners Brno.