The second week of the voluntary program in Croatia, after our days off and our trip to Split and Sibenik, Mohammed, our team-leader, wanted to have another football match so bad that we decided to do him the favor and join.

So after the usual all-together dinner at the football field, we gathered around and divided ourselves into two teams.

The game seemed promising, even though fewer people decided to play this time. We were still having fun, trying to hit the ball and not our opponents’ feet since most of us had no idea what we were doing. 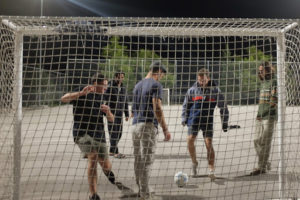 The game turned into a disaster

After a while, the ball, unfortunately, got to me. In an attempt to hit it, I pulled a muscle on my leg so badly that it felt like someone hit me with an iron stick.

Well, to be honest, I saw that coming since I didn’t make any effort to warm up before the game and nights on the island were always cold, which made it pretty easy to get injured. Plus I’m always careless and I hit all the time anyway.

But I’m not a quitter so I had to continue playing no matter what, which provided a pretty ridiculous spectacle since I was basically dragging my foot and I couldn’t actually help my team whatsoever. At least, our audience (Tomi), had so much fun watching us that he couldn’t stop laughing during the whole thing.

Eventually, when the game came to an end, someone said: “Let’s go swimming, guys!!” Εarlier that night, Edi told us that there was plankton in the sea during autumn, which made the water glow. So despite the freaking cold, we rushed to the rocky beach trying our best not to fall down, since the only provided light was coming from the stars. 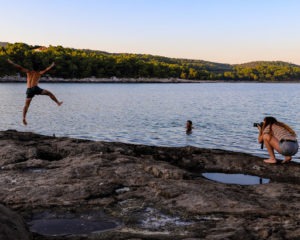 At the beach, we got undressed and started jumping to keep ourselves warm. It took a lot of courage and several counts to three to finally jump into the freezing waters. Despite the immediate numbness of our limps and the loud screams that followed, it was definitely a night to remember.

If I wanted to describe this magical moment accurately I’d have to say that it felt like hanging out with the stars, while swimming in the sky’s pool, since with every movement tiny particles in the water started glowing. Total serenity and beauty filled our souls, which made it possible to forget the unbearable cold.

The real torture, though, wasn’t the water but the way back to our rooms, while shivering and being soaking wet. But the hot shower, the cookies, and the late-night chat we had in our kitchen helped a lot. 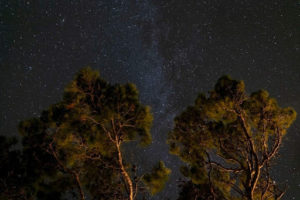 I think the reason why this trip has such a special spot in my heart is the total freedom we had. No responsibilities, no worries, no frequent communication with the outside world, no nothing. It was just ourselves, the shipyard, and the deep blue. A small community that became our home for a little while.

So if you’d ask me: “Would you do it again?” The only answer that comes to my mind is: “ABSOLUTELY!!!”

If you haven’t checked parts 1 and 2 what are you waiting for?:

Are you tired of the lockdown? Read our tips on how to get occupied and keep yourself cheerful!