With a new semester changes in public transportation in Brno come: there’s a renewed transit stop at Domeq. As some of you may know, Dornych street had been closed for reconstruction for nearly two years but now it’s finally open! Thus a new bus stop replaced the old one which used to be strictly for trams: the stop is called Kovařská and it’s situated way closer to Domeq than any other. 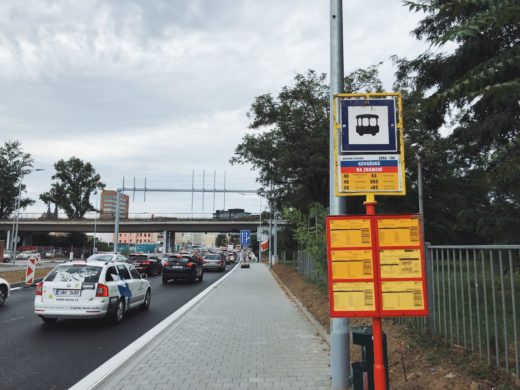 With the new stop back on track we sum up which stops are available within a close distance to the accommodation house for young professionals and students called Domeq:

A newly reopened and the closest stop to Domeq on a brand new road. From Kovářská stop you can travel by buses number 40, 48, 50, 63 and E63. It’s the closest and might be the most convenient stop for all Domeq tenants and visitors.

This stop is located very close to Lidl supermarket. There you can catch buses 44, 77 and 84. Buses 77 and 84 go in the direction of Úzká and Mendlovo Square respectively, whereas the 44 bus goes in the opposite direction.

Železniční stop which functioned before is currently out of order due to reconstruction.

Eager to find out more about public transport in Brno? Read the article where we gathered all the know-how from Brno locals!