One of the first things you need to figure out when you arrive in a foreign country is public transport (in case you don’t plan to drive a car each time!). Every country has its own unique system and sometimes even in the very same country it could differ distinctly in the specific towns. In this article you have a chance to discover some interesting facts about Brno public transport system.

Brno public transport system is called DPMB (Dopravní Podnik Města Brna), which is translated from Czech as “Transport System of the City of Brno”. It runs along fixed routes with set stops according to the arranged timetable. DPMB consists of four types of the public transport: trams, buses, trolleybuses and boats (boats are operated only in a certain period of the year). Brno public transport is very well-developed and used by thousands of people every day. Tickets could be purchased at almost every stop: look for a small yellow ticket machines. For a detailed information about fares and how to use ticket machines, click on this link. The website is updated every day: if there happens to be some repairs or traffic closure on the routes, all the information can be found here. 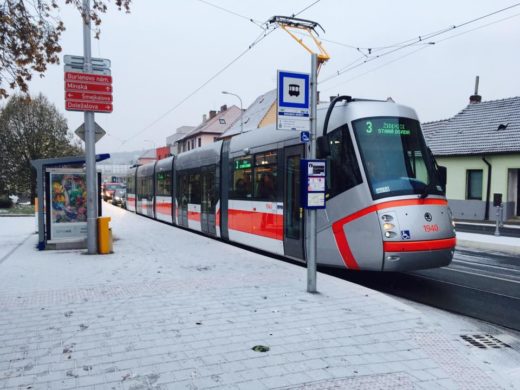 Imagine: it’s your first day in Brno, you already bought a ticket to travel, got in a bus or tram and all of sudden you hear a male voice announcing something you clearly don’t understand (in Prague, on the contrary, they use a female voice in public transport). Naturally, you are able to figure out that he’s talking about stops, but what if there’s something that requires some actions from you? In which cases you should press a button and alert a driver that you have to get out? The answer is very simple: whenever you hear “zastávka je na znamení”, that’s the moment you should press a button on the pole unless someone has already pressed one before you. Buttons and a sign “Stop” above the doors will light up and a bus/tram/trolleybus will stop after that. That’s because a vehicle doesn’t necessarily stop at every stop on his route, some of them are less popular and that’s why you should always notify a driver. 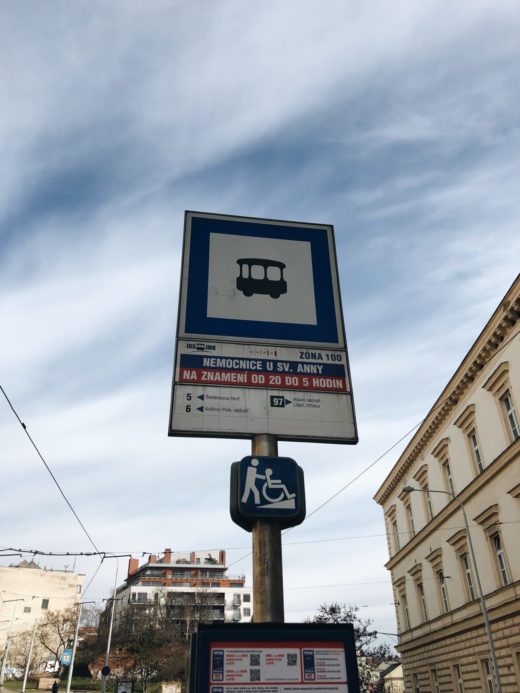 Another hint for you: some stops are request stops and have a special sign: “Zastávka je na znamení”. That’s basically the same what we discussed before: the main idea is to let a driver know that you want to get in. The process goes as follows: whenever you see a vehicle, wave your arm and it will stop. A piece of cake! Some stops could be “request” only at night (from 8 pm till 5 am), at weekends or in the period of repair works. In case of repairs timetables are usually coloured yellow, so they catch your eye and you’ll know what has changed or is going to change. The sign “Zastávka je na znamení” is coloured red; also, if it says that a stop is “request” only in a certain period of time, that means it works only at the time mentioned on a timetable. 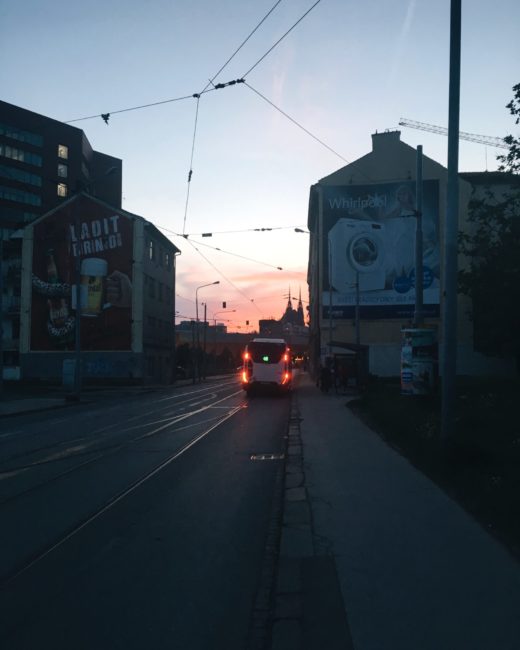 One of the main phenomena of Brno public transport is night buses. They all depart at the same time and each of them has its own route. All of them are numbered from 89 to 99 and stop right in the centre at main railway station (Hlavní nádraží). Watch this short video and see how it actually looks like. Night buses depart every hour and can take you to any corner of the city. Thus, you don’t need to worry about getting home every time you stay late at work or party in a club or your friend’s house 🙂

We have prepared for you a little dictionary, so you won’t be confused whenever you hear an announcement in any public transport:

Finally, last but not least is a ticket inspector. You wouldn’t want to joke around when the one comes and you don’t have a ticket: ticket controllers in Brno are usually very strict and you will be charged right away with a fine of up to 1600 Czech crowns (800, if you pay within five working days). It’s usually a middle-age man without any large bags and they inspect tickets on a regular basis. And it could also be a woman, so if you’re planning a ticketless travel, you better keep your eyes peeled! 🙂 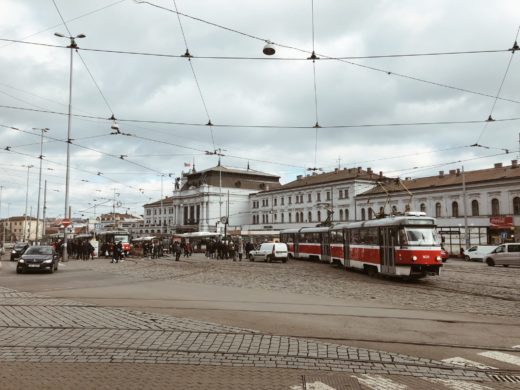 Brno public transport is one of the most appreciated things among expats living in Brno. Italian, Greek, Ukrainian and other expats often speak highly of the Czech public transport (comparing to their homelands) and say that it’s relatively cheap, very reliable and almost always shows up on time.

If you’re ever in the need of the airport transport, and you don’t want to mess with public transport or you simply have a lot of bags and wish to get there as soon as possible, you can book a transport via this link.

2 thoughts on “Tips from Locals: Public Transport in Brno”