#LifeInCzechia It’s harvest time, which means the land will be giving us a lot of its riches, from grains to fruits and mushrooms. And as an expat living in the Czech Republic, you should know that Czechs are passionate pickers! Join us and plunge into the woods and sides of the roads to gather what you can and use it to make some delicious treats, from teas and jams to syrups and liqueurs! 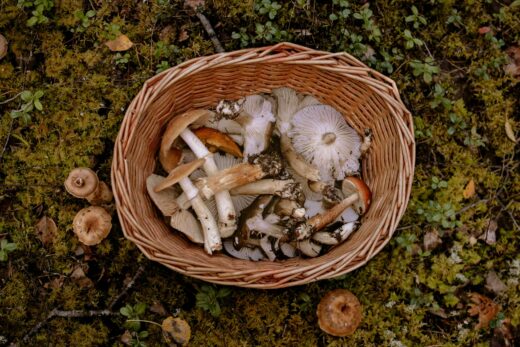 Porcini, the parasol mushroom, and the blusher are some of the most popular mushrooms.

Czechs are one of the few nations of the world that are obsessed with mushroom picking. Even those of us who don’t like to eat mushrooms still like to pick them. Mushroom picking is usually a family event. You can drive out with your kids, park your car near the woods and then go in search of some fungi!

When is the mushroom picking season? Mushrooms grow all the time for the entire year. That being said, the best season to go picking is between April and November. This is the time in which you’ll find the most edible mushrooms in the forest. The best time to go is after it’s been raining (or even while it’s raining!) as mushrooms thrive in moist soil.

Which mushrooms are safest to pick? In general, Czechs like to pick the porcini mushroom (delicious fried with eggs, pepper and salt), which has a round brown hat and its pores are yellow and sponge-like. Other popular mushrooms include the parasol mushroom (great fried with butter and cumin seed), the blusher (great for soups), chanterelles, and honey fungi (good for goulashes).

Autumn is also a great time for picking a variety of fruits, namely rose hips and autumn berries.

When it comes to rose hips, you should pick them in September or October. They’re full of vitamin C, which is great for the upcoming cold (or COVID-19) season. You can either dry them and then use them for tea or make them into jams, pastes, wine, preserves or sauces to go with your meat and dumplings.

Another kind of berries that’s great to pick in early autumn is elderberries. Czechs usually pick them in August, September or October. It’s best to pick them several days after rain because they can go mouldy easily. You can use them for teas, syrups, lemonades, marmalades, preserves, and desserts.

Finally, often on the side of the road, you can find rowan trees which are in late autumn weighed down with rowan berries. You should pick the berries in late October and early November, before the first frost. Rowan berries are full of vitamin C and will be a great friend to you during cold and flu season. You can use them to make teas, preserves, marmalades, jams, and liqueurs. But be careful, rowan berries are only edible after they’ve been cooked or dried! Don’t eat them raw! The acid inside can make you sick.

Dry some herbs for winter colds

Autumn is also prime time for picking some herbs. For example, many Czechs like to pick thyme, which is great for sleeping. You should use scissors to cut it so you don’t hurt the root system.

Another popular autumn herb is chicory, great for your liver and also helpful for dandruff. You can make them into lotions or syrups. You should pick them after they’ve stopped blooming.

Finally, ribwort is a popular herb whose leaves you can pick in autumn. It is useful to treat all kinds of respiratory illnesses, coughs and asthma. It also helps with stomach pains and cleans your blood. You can make it into syrup.

Are you interested in more fun facts about Czech culture? Check out our “culture” category. You can also sign up for our #LifeInCzechia orientation webinar, whose dates will always appear in our Facebook events.