A while ago you were lucky enough to witness my genius over the movie topic and since I’m so generous, now I’m back at it to share with you my knowledge over the most important series of the decade!!!

The coronavirus pandemic has left its marks on us and since we cannot leave our homes what better way to pass our time than by having a series marathon.

I think I shall start this section with some comedy. We all need it in our lives, especially when things get dark. A bit of humor never hurt anyone. On the contrary, it usually helps by freeing the mind and creating a happier environment.

Well, you know Easter is on our way and  I had to acknowledge it somehow. So yeah that’s my first title, deal with it!

Rick, the absolute definition of a brilliant douchebag, and Morty, his kind of stupid grandson, are here to satirize for us with honesty the reality we live in, in an animation show that’s out of this world. 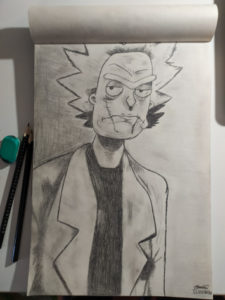 The Big Bang Theory, is about a woman who moves into an apartment across the hall from two brilliant but socially awkward physicists and shows them how little they know about life outside of the laboratory.

If you’re also a nerd deep inside like I am, then that’s a show made for you. Jim Parsons as Sheldon Cooper is everything!!!

Well, I’m pretty sure everyone knows “Friends”. But let’s admit that, I had to include it here! By far the best sitcom ever. I keep rewatching the episodes all the time and I’ve never been slightly bored.

Next, we have three more brilliant series that certainly do not belong to the same genre. But all of them are sci-fi and they present an alternate future or reality. So this section is dedicated to…

Family ties unfold in a rather unconventional time-travel with extreme cohesion.

A well thought out series, that makes you question the reality we live in. Every episode is so intense that afterward, you need some time to process what you just saw.

A horrifying story about a twisted theocratic society. A story not so far fetched if you ask me. The performances are excellent and bring the most out of every character.

Ok, that’s all I got for you now, but I’ll be back soon with some more recommendations!

Now you can go and read my movie list, in case you haven’t done that already.

@daikoumaria, for the sketch drawing