Easter is a popular Christian holiday celebrated by many around the world. However according to the 2010 Eurobarometer Poll, Czech Republic is the 5th most atheist country in Europe. According to this poll, 16% believe that there is a God, 44% believe that there is some sort of spirit, and 37% don’t believe in any type of spirit, God or life force. But Czechs still love to celebrate Easter and have many unique customs, some involving whips…

It is traditional for boys and men to chase girls and women around and hit them with wooden whips (gently, don’t worry!) Or they douse them with cold water. In return, the females give them decorated eggs, plum brandy, candy, ribbons for their whips and even money. This is done to guarantee the woman another healthy year preserving her youth and beauty.

Men have more responsibilities than just whipping women, on what is often called Whipping Monday instead of Easter Monday. Three days before Easter Sunday the men are supposed to walk around town with wooden rattles. The noise made by shaking them is supposed to scare Judas away. The whips, by the way, are traditionally hand-made by the men out of pussy-willow branches. 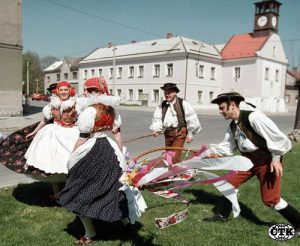 Women spend Sunday decorating eggs and preparing the traditional delicacies: lamb-shaped cakes, coffee cake (babovka) and almond and raisin cake. The eggs are decorated with a variety of interesting materials! These include simple watercolors and bee’s wax but also onion peels and stickers! Every year there are competitions for the best decorated Easter egg, also known as kraslice in Czech.

Czechs get Easter Monday off from work and school, not the whole week which is common in some countries. Stores are filled with chocolate eggs and bunnies from the middle of March, although bunnies are not at all traditional to Czech Easter celebrations. 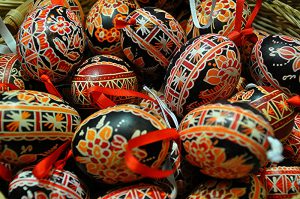 If any animal is singled out on Easter, it’s the lamb. To Christians the lamb symbolizes the Lamb of God and Jesus Christ. In the South of the country they used to bless a lamb which they believed would help travelers find their way through the forest. Today it isn’t very common to eat lamb anymore, so instead cakes are baked in the shape of it. 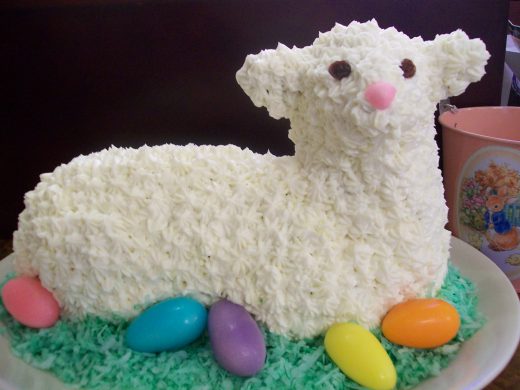