Pumpkin carving, scary costumes, parades with lanterns. Halloween has been celebrated in the Czech Republic as well, although it’s not a traditional Czech holiday. The reason might be commercial but it is also because of many expats in the Czech republic who come from a country where Halloween is an inseparable part of the culture.

The United States of America is one of those countries. How does an adult American man who’s been living in the Czech Republic for more than a decade cast his mind back to the times when he was a boy and the day was October 31st? 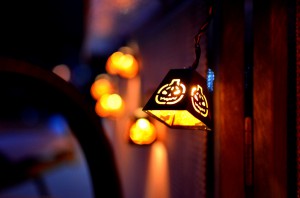 I always associate Halloween with a certain kind of weather. I’m from the upper-Midwest, so a typical Halloween was cold, wet, and often windy. My family’s home was in a residential neighborhood of a small city. Large turn of the century Victorian homes dotted the hillsides ringing the center of the city and giant maples lined the streets. By that time of year, most had lost their leaves and dead leaves were everywhere; plastered across lawns, slicking the sidewalks, or already lining the curbsides of our more fanatical neighbors.

From about age 7 – 11, Halloween meant that my grandparents were coming over for dinner, my mom was making the chicken stuff that made me gag (who needed to eat anyway with all that candy on the horizaon), and my grandpa was taking us trick-or-treating. We’d usually head out just after dark, maybe 7 o’clock or so, costume on and bag in hand. My sister usually went as something typically girlie – Madonna, gymnast, etc. I was a soldier on multiple occasions. One year my mom was really busy and we both forgot about a costume, so she put a brown trash bag over my head and said I could be a raisin. The shame is still with me.

Sometimes we’d go with a group of kids from the neighborhood and a few adult watchers, other times it was just me, my sister, and my grandfather. Jack-o-lanterns carved in the days leading up rimmed the porches and steps of the neighborhood. If the porch light was on, then that house was open for business. A few houses would go all out with fake spider webs, stuffed witches, scary lights and music. Others houses were more subdued, maybe a single pumpkin and a bowl of candy left on the stoop for you to help yourself. The typical encounter was to ring the bell or knock, and a masked adult would come to the door and when given the requisite “trick or treat”, deposit a handful of candy into your bag. You ranked the homes by the quality of their offerings, the good places gave you mini-Snickers, Malted Milk Balls, Milk Duds, or Sweet Tarts. The middle of the road places would give a handful of the generic black and orange candies from the bulk food section of the supermarket that vaguely tasted of peanut butter. The lowest of the low opted for miniature boxes of raisins, or even, ugh, apples. All you could do was a give a fake smile and say thanks.

We’d circle the neighborhood for an hour or two. You’d always run into friends, classmates, or weird kids from school that you thought had moved away. Grandpa was always a good sport, but when he got tired, cold, or too wet we’d head home to feast on sugar. My sister and I would both rank our loot, separating it into the good, the bad, the suspicious, or the straight into the garbage (apples). I had friends whose parents would take their candy and slowly dole it out to them over the coming days or weeks, but my mom usually just said have at it, and my sister and I would eat until we couldn’t peel another wrapper or tear another box.

I always ate the best stuff first. That stuff usually lasted for a day or two, after that you got into the middling and bad stuff. The raisins were completely ignored. The suspicious items were the last to go, maybe the wrapper was torn, it was squished, or the house/person who gave it to was weird. There were urban legends that flew around about kids biting into a candy bar with a razor blade in it, or eating M&Ms with poison in them. You never knew, and that’s why you ate the suspicious things last. A week later, the candy was a fond memory until next year.

We are happy to listen and share your stories.  If you want to tell us about Christmas, Easter, or any other holiday in your country don’t hesitate to contact us.