Meet Karel Tumlíř, the youngest Relocation Consultant at Foreigners Brno (so far)! Thanks to his focused mind and hard work he got promoted and was even elected as a so called Player of the Month of October, all in the same day! Karel speaks five languages and has many interesting hobbies that you can discover throughout this interview.

To begin with, are you from Brno? How long have you been living here?

I’m not from Brno. I’ve travelled quite a lot through my life. I was born in Prague, but when I was only 3 months old, we moved to Valtice which is a small town in the South of Moravia, close to the border with Austria. For some reason, my parents found out that there was a possibility for Czech kids to go to kindergarten and have the whole elementary/primary school in Austria. So I was living in Valtice most of my childhood, but I was going to school in Austria every day which was around 10 or 12km far. Then I left for a high school in France, in Strasbourg. I was there for 3 years. After that, I came back to finish high school here in the Czech Republic, and that was when I arrived in Brno. I’ve been living in Brno for maybe 6 years now.

Have you finished your studies yet?

I am actually still doing my bachelor’s degree, I’m finishing it this semester. I’m probably going to stop for a while after that, and really do Foreigners full time, because I also have a lot of other stuff that I do, such as my music.

What do you like the most about the company?

Honestly, I like everything! Maybe I can say the philosophy of the company. Everyone who works here, even the top management of Foreigners and the owners, everybody really, is just living that philosophy and according to it. Everybody is equal everywhere. Everyone is friendly and respectful and that is just great. The people. That’s the best trait of Foreigners.

How come you have started working at Foreigners?

I was looking for a job in Brno. My main motivation was to have more money, to be able to invest in my hobbies, mainly one of them, my music. I contacted various agencies, and on the internet, I stumbled upon the job offer from Foreigners, and I just thought “Uau! This is incredible! If I had the option to use an agency such as this one during my time in France that would have been great!” and that’s why I applied here. I would have used these types of services, and now I want to help people who are in the same situation that I was. So I just tried. It was a long shot but somehow it happened.

You’ve been working at Foreigners for 3 months now, and already got recognized for your good work, being selected as the best team member of the month of October and scaling up on the internal company chart that shows the level of proficiency. How did you manage to achieve that?

I don’t know… Actually, I’ve been aiming for it, but not really (?) I just wanted to try to see if it was possible to do it. I don’t think this was my best. I was working hard, but I was establishing everything. I know that I can go further than this.

I believe that it happened because Foreigners has an amazing way of introducing new employees into the process. Everybody helped me and answered all my questions. They were always there if I needed something. That kept me highly motivated! Everyone is super friendly. My success this month is also my team’s success.

Can you share with us a little bit about your current position at the company?

Do you have any future plans for your career?

I think that everyone has plans for their careers. If I could think of anything it would be seeing myself in 10 years with my music career established and with my team. We’re working very hard and it’s starting to look good already.

I know you can speak at least 5 languages. Which ones? How did that happen?

I speak Czech. German was the second one I learned. I don’t even know how I learned it because I started to learn it during kindergarten, and when you’re a kid everything just seems to flow through you. English was the third, I had classes during elementary school and also I moved to Miami, Florida and I picked it up there. The fourth language was French. I started to learn it also as a kid, because my parents own a property in France. I used to go there every year for the holidays, so I learned it there as well. At the time I didn’t know the grammar, I only knew how to speak a little bit and I sounded like a complete stranger. Only when I went to school in Strasbourg I started to study it more seriously. At the same time, I started to learn Russian and I pursued that on a  university here in the Czech Republic, so that’s my weakest language.

Does knowing all these languages take an important part in your job? Can you tell us some specific situations where it was beneficial for you?

For sure! It’s also important for me. I would put it this way: I have a job like this for my languages, not otherwise. I use them everyday in my work and that’s great because I won’t forget them. Actually, I’d be happier if I had more clients from France and Germany, because usually I just use English, but yeah. It’s practical.

One good example would be when the other day an Italian couple came to the office and only the husband could speak English. I could tell that she had a lot to say. I don’t really remember how exactly, but some French words came up and the lady also spoke French. That way, I was able to communicate with her and understand her needs. It was great!

You’re also a music artist. Can you tell us about that part of your life? When did you start making music? And where can we hear your music?

You can find most of my work on Youtube. It’s not a lot. There’s only two songs out right now, but there will be more and you can also see me in different venues around Brno or the Czech Republic with live shows. In the future, you’ll be able to listen to my work on streaming platforms such as Spotify… I’m currently working on an album, it’s still at its  beginning, but it’s something serious, so it will be everywhere.

It’s interesting. I remember my dad asking me what I wanted to be when I reached adulthood, and I told him that I wanted to be a rapper, just because I had just seen this movie and I was super into it. Then I completely forgot about it and I wanted to be a banker and an economist, and so on… After that, three years ago, I just got into it again, somehow. Probably due to my friends, because they were doing it at the time, and right now we’re all doing it together. So I thought, “why not try it?” I started to produce some beats and writing my first lyrics and now we’re here!

Great! I’m very happy to know that you’re pursuing your passion, and I wish you nothing but success! Also, I’m looking forward to see you performing live! 🙂

Do you speak any of the languages above and would you like to relocate with Karel or any other of our Relocation Consultants? Contact us via info@foreigners.cz and we will get back to you! 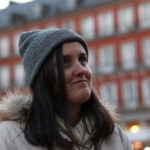 Ahoj, everyone! I'm Mariana. I'm from Portugal and I'm an Erasmus intern in Brno. I hope you enjoy my articles and learn something new, just like I will! See you around!