I think my year spent in Warsaw was adequate preparation for moving to the Czech Republic but it still came with its obstacles and culture shocks.

One of the most important things to learn is the fact you’re probably going to make some frivolous mistakes.

Milk options in the Czech Republic

Once I spent 25 minutes looking for bread crumbs, (strouhaná houska) I looked in the flour and sugar aisle, they bakery, organic food, etc and I could not find something that resembled bread crumbs! Finally I just decided to buy flour, but when I got home it turned out I accidently (on purpose) bought bread crumbs! It was a pleasant surprise and I was able to make the fried cheese I was craving.

These types of things are going to happen – you can overcome these obstacles by writing things down, learning a few Czech words, or learn from the mistake for the next time. 🙂

My brother and sister were just here for a short visit and at the restaurant my sister wanted something “on the side” and I explained to her that I don’t deviate from the menu. I order meals exactly as they are presented, which sometimes can leave you with a dish topped with your least favorite food or sauce.

I was with a friend in a grocery store and he wanted to get some ham and walked up to the counter and I asked him why he was at the counter, because as non-Czech speaking expats, it is always easier to buy the prepackaged meats and cheeses than trying to order from the counter. However, you can certainly manage. When I order ham from the shop I say “deset šunka” (10 ham) 😀 Although this is quite funny to Czechs and Slovaks, it is effective! Also, I am a stranger to the metric system so I would be confused how much I wanted even if I could say it correctly. One of my favorite language barrier stories comes from a friend of mine. He was expecting O2(internet and cable company) to stop by to install his cable, so when he got home to his building the lady at the front desk pointed out a sign to him that was taped near the elevator. The sign had an 02 heading and as he didn’t speak Czech and thought it was for him, he ripped off the sign, said thank you, and walked up the stairs to his flat – when he got to his flat and translated the sign, it said “Elevator Out of Order!” 😀

One thing I like to do to overcome the Czech language barrier is take photos of signs that I don’t understand but think might be important.

For example, at the tram stop near my flat, you find the sign:

Which translates to “This stop is not night lines service” and that is probably not the exact translation, its good enough that I now know you cannot catch the night bus at that stop.

One more tip for the language barrier is the ATM (bankomat) – you don’t realize how important it is to learn “cash withdrawal” until you are standing at a Czech-only ATM with a long line of patiently waiting Czechs behind you. 🙂

I must recommend always having a ticket when you ride public transport. Although in my 9 months here I have only been checked a handful of times, it’s not worth paying more than 700CZK if you get caught. I have also seen controllers on the night buses so don’t think you won’t need a ticket just because its late night. 🙂

Also, if you buy a 1-3 month pass, set a reminder when the pass is going to expire. You don’t want to find yourself with an expired pass when the controller discretely surprises you with his badge.

Always stand up for the elderly – its Czech culture 🙂

In my opinion – the Czech culture is quite great. Although some of their traditions are a bit strange (Easter whippings, etc.) I find generally their traditions are unique and fun. If you get the opportunity to spend time in the Czech Republic for holidays, special events, etc. definitely try to take advantage of experiencing these.

Tobacco can be smoked almost anywhere. If you walk into a café or bar you will discover you walk out smelling of cigarettes, have developed a smokers cough, and your teeth have turned yellow – well maybe it’s not that bad but smoking is allowed and welcomed in the Czech Republic.

In the United States, smoking laws are different among different states but in my home state of Pennsylvania, smoking is strictly prohibited in almost all public places.

Alcohol is a defining and important quality of Czech culture. As most people have read throughout their discovery of the Czech Republic – they are consuming more beer than any other nation.  Best of all, it seems the Czechs handle their excessive drinking with dignity. I rarely spot drunkards making a scene, fighting, or vandalizing around Brno (perhaps it’s different in Prague.)

Alcohol is sold everywhere, and for extremely reasonable prices. This is a cultural difference for me coming from a Commonwealth state in USA. In Pennsylvania, liquor is only sold in ‘state stores’ and beer is sold in bars and beer distributors – never in gas stations or small shops. 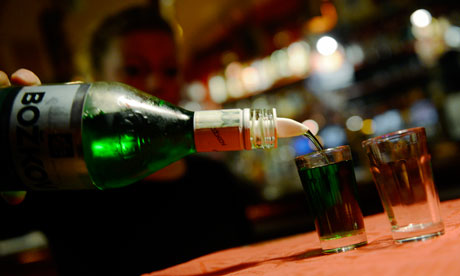 I find Americans are very friendly, of course I often hear “Americans are fake” because of our excessive kindness to strangers. However, this is something I am use to and I say hello to strangers, excuse me if I bump their arms in the store, allow them to walk in ahead of me, make eye contact, and smile at every other person on the street.

This is not something I have found in the Czech Republic. You don’t find people generally acting concerned or interested in the strangers that fill the streets around them.  I have had many awkward encounters when I have said “dobrý den” to somebody and they respond with a puzzled look and silence.

Overall, the Czech Republic and the United States are more similar than different. I enjoy the small differences that make me feel abroad, but I also find comfort in the familiarity in Czech culture.

The best way to learn how to navigate through the Czech Republic or any foreign country is trial and error. You’re going to order meals at restaurants that you didn’t want, buy milk-like-yogurt when you meant to buy 2% milk, and you will struggle at times in shops, etc. but eventually you will figure everything out and that is the exciting part about living abroad!

A quote that perfectly sums up my thoughts on being in the Czech Republic as an American expat:

“..But that’s the glory of foreign travel, as far as I am concerned. I don’t want to know what people are talking about. I can’t think of anything that excites a greater sense of childlike wonder than to be in a country where you are ignorant of almost everything. Suddenly you are five years old again. You can’t read anything, you have only the most rudimentary sense of how things work, you can’t even reliably cross a street without endangering your life. Your whole existence becomes a series of interesting guesses.”
― Bill Bryson, Neither Here Nor There: Travels in Europe”

My last tip is for you to attend the Foreigners.cz MeetUp, English meetings, weekly Pub quizzes, trips with fellow expats, etc. There are a lot of organized meetings and trips for expats, and they are the best way to meet new people, and spend quality time with friends you have already made. After all, it’s the people you meet that truly make the experience unique and unforgettable.

2 thoughts on “American Expat in Brno”