Do you have plans for the summer? Does it feel like there is nothing much to do now that the borders are still somewhat closed? Luckily, National Theatre Brno is here to help! An exceptional summer full of plays in all buildings of the National Theatre Brno (NdB) as well as opera at the Špilberk Castle awaits us! From June 1st you can buy tickets for 24 performances played during the whole summer by the theatre groups of the NdB.

Sadly, the National Theatre Brno (main building of NdB) will not perform any plays this season. Because of the current countermeasures, our partners, the NdB, would be able to open only one-third of the auditorium and that wouldn’t be convenient for the viewers or the theatre itself. Some viewers would have to sit all the way in the fourth row, and they would have to look at hundreds of empty seats in front of them. Despite that, they hope to welcome you in the rest of the theatre buildings: Reduta Theatre, Janáček Theatre, Mahen Theatre and the Špilberk Castle. 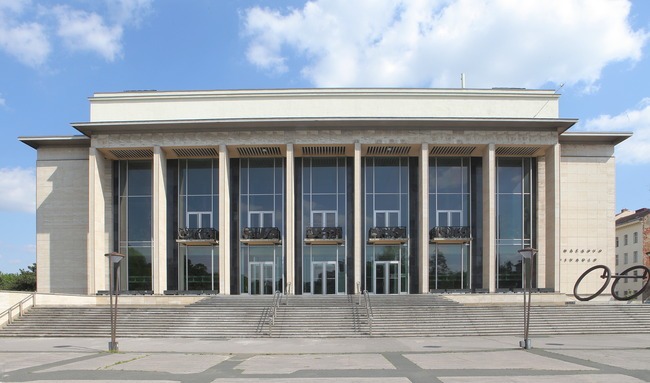 The main entrance of the Janáček Theatre – one of the buildings of NdB
Source: http://www.ndbrno.cz/

The Janáček opera is going to reopen during the 2019/2020 season to express thanks to the volunteers and the first responders for their work during the pandemics. You can look forward to dress rehearsals of the Greek Passion and Ferda Mravenec. The NdB will then close the season on June the 1st at 7 pm with an open-air concert at the Piazzetta in front of the Janáček Theatre. At the courtyard of Špilberk castle, you will be able to watch multiple operas – for example, The Barber of Seville, Nabucco, La Traviata or Carmen. These operas will be played over the whole summer for you to enjoy.

During these days all of the buildings and their stages and dressing rooms of NdB are holding intensive rehearsals so they would be able to introduce all the planned plays. They are starting out with the next season unusually already in August and during this season you can look forward to six new titles consisting of a wide variety of drama, opera and ballet premieres. This includes anticipated hits like a comedy Slaměný klobouk, Radio and Juliet, a ballet accompanied by the Radiohead band in Mahen theatre or a family-friendly opera Ferdy the Ant in Janáček theatre.

NdB is working intensively on reopening the theatres according to the unusual conditions and countermeasures. “We hope that the reopening of all the theatres of NdB and playing of all planned premieres will be great news to all the viewers,” they state Also, during the next season, you can join the 7th international festival Janáček Brno 2020.

2 thoughts on “Start Your Unforgettable Summer with National Theatre Brno: Tickets on Sale!”