Let’s face it: nowadays it’s really hip to be raw, vegan, gluten-free, bio etc. Being a vegetarian is simply no longer enough or trendy 🙂 I decided to focus on vegans today, as I myself got encouraged into trying this lifestyle out by a number of thinking alike friends.

Some might not even know, what are vegans like. As Wikipedia suggests, veganism means abstaining from the use of animal products. However, being vegan is not just a diet, it’s a mindset and a way of life. According to vegan philosophy, animals are not to be treated as a commodity. Which implies not to wear clothes including animal products (wool, leather), not to use any animal-tested cosmetics and avoid industrial farming as it is considered environmentally damaging and unsustainable.

The vegan diet consists of plant-derived foods only. So what a vegan can possibly eat? It seems more simple to explain, what a vegan cannot eat. Any kinds of meat, fish, seafood, milk, dairy products, eggs and honey (yes, bees are animals too!) are out of the question. The bulk of the vegan diet should be made up with fresh fruits and vegetables, grains, nuts, and seeds. There is also an incredible variety of meat and dairy alternatives, such as soy and bean burgers, cheeses made with coconut milk and even vegan ice cream.

The most common stereotype about vegans is that they only consume salad leaves and soybeans. The vegan diet can actually be very diverse, from pasta, beans or rice to more sophisticated dishes like sushi with avocado or cucumber, vegan pizza, pad thai or even pancakes baked without milk and eggs. The variety of recipes is amazing, you learn to be creative and exchange animal products to plant-based ones.

Vegans lack vitamins and are unhealthy

Vegans statistically enjoy a longer life, however, a lack of important vitamins concerns everyone. Enough vitamin D, B12, and Omega3 can be however received from food supplements. For example, vitamin B12 is found almost exclusively in animal tissues, initial symptoms of B12deficiency include: lack of motivation, apathy, mental fogginess, muscle weakness, and fatigue. Things won’t come to this point if you simply start taking the B12 supplement on a daily basis.

Where to enjoy a vegan meal in Prague

This raw & vegan restaurant has 2 branches: one in Vršovice, Krymská street and another in Prague 1, Jindřišská street. Speaking from my personal experience, Krymská branch has a homely interior and a great variety of home-made lemonades and juices. In the menu you’ll find an impressive selection of vegan meals, to mention specifically they do burgers, risottos and even vegan svičková (maybe it’s just me, but one of the dishes looked exactly like this Czech traditional meal).

Dhaba Beas is a chain of vegetarian restaurants in Prague. Eight branches are spread around the city center and its close surroundings. Dhaba works on a buffet principle when you serve yourself and pay per 100 g. The menu changes slightly day after day, the individual meals are marked as gluten-free, dairy or vegan, so it’s easy to get a feel for it and figure out, what to have. This is a perfect option for everybody who feels like having a light meal and it’s just ideal to serve exactly how much you can it. (In my case, I sometimes end up paying 55-60,- CZK for my lunch/dinner). In Bělehradská restaurant they also offer a killer-deal: 40% off all foods an hour before closing!

Another buffet restaurant also offering menu ala-carte. I first heard about the Loving Hut in Hong Kong, apparently, Prague restaurant belongs to the biggest chain of vegan restaurants around the world. The concept is really similar to Dhaba Beas, they have a few branches around Prague as well. I would say fake meats are their specialty, also vegan cakes served there are gorgeous and make it hard to believe something this great was made without eggs or butter. 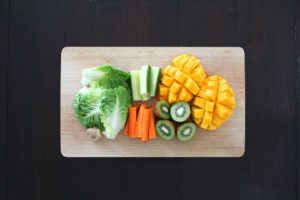 Vegetarian restaurant in Prague 1 also offering some vegan treats. The name of the restaurant in Czech means ‘clear head‘ and according to the website, “aims to satisfy your senses and clear your mind“. Lehká Hlava is situated in an enchanting building downtown, the interior itself was created with the hands of various Czech designers. It’s worth paying a visit on a special occasion or when you want to impress your non-vegan friends.