Tis’ the season – it’s time for St. Nicholas, Christmas, and New Years celebrations. So, how do the Czechs celebrate the most wonderful time of the year? They indulge in warm wine, delicious foods, cakes and cookies, Christmas carols, and unique superstitions. Christmas season in the Czech Republic starts with St.Nicholas Day on December 6th, and ends with the visit from the Three Kings.

The most popular advent holiday in the Czech Republic. St. Nicholas is believed to come on December 5th (bringing apples, nuts, and candies), along with his friends, a devil – who carries a whip, and takes the naughty children away, and an angel who appeals on their behalf. The holiday is a reminder that baby Jesus is on his way, and a day where good children receive small gifts, chocolates, apples, etc. and those children who behaved naughty through out the year are said to receive potatoes and coal. After the children’s treats, St. Nicholas shares a toast with the parents. 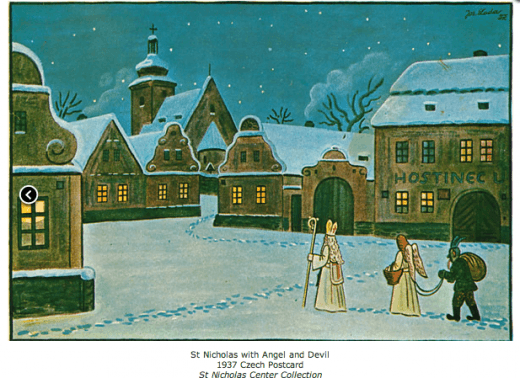 The most important day is Christmas Eve when traditionally the tree is decorated, and the family gathers for a feast after fasting all day. Tradition says the meal should not be served until the first star comes out. Christmas in the Czech Republic means plenty of delicious food.The table is traditionally covered in foods that have been grown by themselves throughout the year, such as mushrooms, saurkraut, garlic, goats, dried fruits, black kuba, etc. Perhaps the most important part of the meal is the Christmas Carp. Sometimes the carp is kept in the bathtub for a few days as a pet for the children, or a shocking surprise for guest. 🙂 Czechs also believe that if they put a scale of the carp in the women’s purse, it will bring enough money for the following year. (Perhaps this is something worth trying :))

After dinner, it is time to gather around the Christmas tree and open gifts. Children believe the gifts have been placed under the tree by baby Jesus. Like Santa he receives letters from children weeks before Christmas so he knows what to bring when he sneaks through the window to deliver the gifts.

These two days (December 25th and 26th) are known as First and Second Christmas Holidays in the Czech Republic. Today they are enjoyed by relaxing with friends and family and enjoying the special time of the year together. Although, traditionally, it was a time when people came together and went door to door singing Christmas carols. Today’s Christmas dinner consists of fish soup and fried Christmas carp served with potato salad. Of course, it is not Christmas without cakes and cookies. The baking starts well in advance, at the beginning of the Advent, and people indulge in sweets through the entire Christmas season. Some favorites are the sweet and aromatic vanilla crescents, “wasp nests”, marmalade cookies known as Linz, gingerbread cookies, Vánočka, a sweet white dough with raisins, and apple strudels.

Cherry Tree Twigs (Barborky) On December 4, St. Barbora’s Day, an unmarried girl is supposed to cut a twig off of a cherry tree and put it in water. If the twig blooms by Christmas Eve, the girl will marry within a year.

The Throwing of the Shoe An unmarried girl is supposed to throw a shoe over her shoulder and towards the door. If the shoe lands with the toe pointing towards the door, the girl will marry within a year.

For telling the Future

Floating of Walnut Shells – Candles are placed in empty walnut shells, and each family member has their own. Everyone’s shells are then floated on a large bowl of water. If the shell makes it across the bowl, its owner will live a long and healthy life. A shell that sinks brings bad luck to its owner. Also, the shells that stick together are the relatives who will stay together, and if a walnut drifts away, that family member will grow distant in the coming year.

Cutting of the Apple – Every person present at the table cuts an apple in half. If the core is shaped as a star, it means that everyone will get together next year in happiness and health. A four-pointed cross is a bad omen and means that someone at the table will fall ill or die within a year.

Pouring of Lead – Traditionally, A piece of lead is melted over fire and then poured into a container of water. The resulting shape will tell the pourer’s destiny. Today people use just wax.

The first person to leave the table after dinner will be the first one to die in the coming year – that is why everyone should get up from the table at the same time. No one should ever get up from the Christmas table before dinner is finished. Doing so brings bad luck and death in the family. The table should be set for an even number of guests. An odd number brings bad luck or death. – Find all the known and even not-so-known superstitions here. 🙂

The New Year is celebrated in the Czech Republic similar to traditions we see around the world – with friends, and relatives, and at parties, pubs, concerts, restaurants, and people are partying, drinking, and dancing. People gather on December 31st often times in the city centers, and public places where Christmas decorations and celebrations have been taken place. Sometimes people prefer to spend the holiday in the mountains or at home with their closest friends and relatives. The New Year is greeted with champagne, cheers, and spectacular firework shows near city squares. You can watch the count down on major TV networks, and is traditionally followed by the Czech national anthem. On New Years Day the Czechs often gather around to watch the Presidents New Years Speech (1p.m) – where he evaluates the previous year, and announces his predictions and expectations for the coming year. January 1st is also Czech Restoration Day of the Independent Czech State (Den obnovy samostatného českého státu; Nový rok) when they peacefully separated from the Slovak Republic in 1993. The New Year in Czech Republic is a great celebration – one certainly not to be missed 🙂

Don’t forget to have some Svařák (Mulled Wine) – a warm red wine, traditionally made with cinnamon, cloves, citrus, and badyan. (Although families have their own secret recipes which sometimes includes hard liquor :)) How will you be celebrating the holidays this year in the Czech Republic? If you are returning home for the holidays, what are your traditions in your home country? 🙂

2 thoughts on “Christmas and New Years in Czech Republic”