The square was renamed in 1848 to Václavské namesti (Wenceslas square) as a tribute to Wenceslas I, patron Saint of Bohemia. 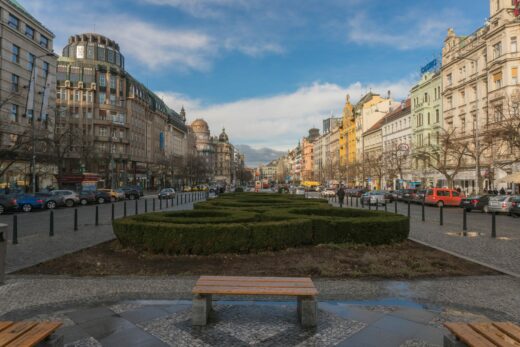 The French have given Wenceslas Square the nickname “Champs Elysees of Prague”  because of its dimensions of 750 meters long by 60 meters wide, the famous square resembles an avenue more than a traditional square.

The buildings in Wenceslas square have a variety of architectural styles that display different eras of architecture throughout Czech history. The square also has rows Linden trees, which add to its beauty and charm.

This place has been the site of many historical events.

What we can see

On the upper part of the square you can see the statue of Wenceslas I of Bohemia, nicknamed the good king, below you can see the Saints of the region, Prokop, Adalbert, Agnes, and Ludmilla.

You can also see the Jan Palach memorial plaque, which displays the names of victims of communism. We must open our eyes to  find the place of his sacrifice, which is marked by a wooden cross at the end of the square. There is an annual commemoration held on January 19th in his honor.

At the top of the square you can see the National Museum with a monumental staircase. It is the largest and oldest museum in the Czech Republic founded in 1868, and completed in 1890. You can currently see an exhibition on the monarchy until June.

Kavarna Europa (Grand Hotel Europe) is a hotel with Art Nouveau decor that dates back to 1906 and has become a favorite place to have coffee for tourist. Of course you can just admire the unique facade that appears to be from another era. Much of the interior decor is original, like the counter tops, mirrors, paneling, the restaurants furnishing, etc

The lamp-cubist is not always easy to spot. However, this lamp ribbed concrete is a work of art and not to be missed because it is the only cubist lamp in the world. It is located close to the metro station Mustek, next to the Functionalist Bata building.

The church of “Church of Our Lady of the Snows” (Kostel Panny Marie Sněžné) never goes unnoticed. It dates back to the 14th century. Charles IV wanted to make it the most important and grandest church in Prague. It has the highest temple in Prague at 34 meters.

Today it is only possible to tour the chancel of church, which was completed in 1397. To access the courts you must go through the Austrian Cultural Institute (Östereiches Kulturforum).

Franciscan Garden (Frantiskanska Zahrada) is an old medicinal garden & a Franciscan convent. It has been open to the public since 1950. This garden makes for the perfect place to relax. You can still see the herbs and their preparation that were used by the Franciscan monks in the 17th century. It is also a good view of the “Church of Our Lady of the Snows”.

Passage Lucerna is one of my favorite places. It leaves an impression that time has stopped. This place was designed by the grandfather of Vaclav Havel. Style is art nouveau. The place is located between the streets Vodickova and Stepanska . You will find a few shops, a café, and a nightclub. But the most surprising characteristic is the sculpture of David Cerny “Horse” created in 1999. This is a nod to the equestrian statue of Wenceslas on the spot. In this statue the king is shown seated on the belly of his dead horse, whose legs are suspended.

The place has another personality during the night and does not attract quite the same people. There are touts who will ask you to take a visit to their ‘cabarets’. You also risk running into groups of people who are unpleasantly intoxicated. Of course we must also be careful of pickpockets, especially if you stop for some fast food.

Restaurants that you can find on the site are generally for tourist, but if go a few blocks away from the area, you can find good restaurants with traditional Czech food but without the crowds and prices of the tourist-targeted restaurants.

I recommend the U Ferdinanda, the dishes are pretty standard and their prices are reasonable. The interior is original and decorated with gardening tools. For example, you will find a trowel as an ashtray on the table. The only potential downside that I can think of is that the restaurant room becomes noisy, and therefore difficult to communicate. You can also taste the “Sedm Kuli“- the name refers the seven bullets that killed the archduke Franz Ferdinand. The restaurant is located at the corner of Opletalova and Politickych.

Another good restaurant near U Ferdinanda is Bredovsky Dvur, a traditional Czech restaurant with a great location. The setting is quite warm despite the gray stone floors, and it has a great atmosphere.  The first room of the restaurant is a perfect place to watch sporting events.

Or if you’re feeling peckish you can stop for a snack at one of the many sausage stands.

A tip for a very nice place to stop for a drink on Wenceslas Square (but is often too crowded) is the bar & restaurant Vytopna. It is located at the top of the square. A great feature of the bar is once a server has taken your drink order, an electric train delivers your beverage. The restaurant and bar is connected by an extensive rail system. This wakes up your inner child or you will at least be impressed by the concept.

What is your favorite thing to see or do at Wenceslas Square? Do you have any tips for us for when we are spending time at this famous square? 🙂