Valentine’s Day is celebrated on the 14th of February each year in many countries and cultures around the world. In Lutheran and Anglican communions it is an official feast day known as “Feast of St. Valentine.”

February 14th is the name day of Roman Saint, Valentinus. A Saint who had a tradition of courtly love. There is little reliable information on St.Valentinus, but perhaps the most popular story is that he was imprisoned for marrying soldiers who were forbidden, and ministering Christians who were persecuted under the Roman Empire.

It is also said while in prison he healed the daughter of Asterius, the man who jailed him. Legend has it that in his farewell letter to the daughter it was signed “from your Valentine”

The first recorded association of Valentine with romantic love was in 1382, in Parlement of Foules, a poem written by Geoffery Chaucer to King Richard II for the anniversary of his engagement to Anne of Bohemia.

For this was on seynt Volantynys day  Whan euery bryd comyth there to chese his make.

[“For this was on Saint Valentine’s Day, when every bird cometh there to choose his mate.”]

The first time the idea of giving ‘Valentines’ (cards) to your loved ones was in Britain in 1797, when a clever publisher issued The Young Mans Valentine Writer, a source of verses for young men who were unable to write up something on their own. Printers began publishing these verses with sketches, known as “mechanical valentines.”

By the 19th century, paper valentines were extremely popular in Britain, and were manufactured in factories to keep up with demand. The valentines began being created with lace, ribbon, colors, pictures, etc. In the United States the first mass production of valentines started in 1847.

In the 20th century, it appears cards were not enough anymore and Valentine’s day extended to the giving of candies and flowers. By the 1980’s the diamond business decided to get in on the lucrative holiday by promoting diamonds as the perfect expression of love.

Today, the U.S. Greeting Card Association estimates there are 190 million valentines sent each year, and when you include the popular tradition of trading valentines in school, that estimation jumps to 1 billion, second only to Christmas with 2.6 billion.

The Internet has created new valentine traditions such as e-cards, e-gift cards, love coupons, etc.  An estimated 15 million e-cards were sent in 2010.

Today, Valentines day is often called a “Hallmark Holiday” in the United States because of its mass commercialization.

St. Valentine’s day has been celebrated in Anglo-Saxon cultures since the middle ages, but it is a rather new celebration in the Czech Republic. It wasn’t really known until after the Velvet Revolution in 1989.

Czechs have traditionally celebrated their lovers on May 1st, commonly known as International Labor Day, but also the “Day of Love” in the Czech Republic. Keeping with Czech superstitions, on the 1st of May it is believed couples should find a blossoming cherry tree to share a kiss under to ensure happiness and health.

A lot of Czechs still don’t feel much spirit on Valentines day because May 1st is their day for lovers, and some view St. Valentine’s Day as an imported holiday that is very commercialized.

Presumably, commercialism, retailers, florist, and restaurant owners are the driving force behind Valentine’s Day increased recognition and celebration in the Czech Republic.

Today in the Czech Republic, shops offer a range of flower arrangements and valentine cards specials, and restaurants have special meal deals for two. Of course, making money probably isn’t the only reason the Czechs have started to indulge in candies and flowers on the 14th of February. The spirit of love is genuine on Valentine’s Day, especially among the younger generations.

““We think that it was mostly due to companies who first began pushing Valentine’s Day, because it’s primarily a holiday for giving, which means you can use it to sell something. But now I realize that – even among my friends – people are saying, ‘Well, you know, I don’t really care about Valentine’s Day, but I’m definitely going to do something little.’ “

The gifts that are given in the Czech Republic are similar to what is common around the world; a dozen roses accompanied with small boxes of chocolates, cards, dinner in fancy restaurants, and for those lucky ladies and gentleman some jewelry and perfume. 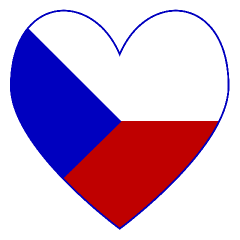 Although many of us might believe Valentine’s Day is a silly holiday just to get some money out of our pockets and into the stores during the down time between Christmas and Easter – it is a good excuse to spend extra quality time with our lovers, friends, and family, and having a box of chocolate only makes that quality time sweeter. 🙂

How will you be celebrating Valentine’s Day in the Czech Republic? How is it celebrated in your home country? 🙂

8 thoughts on “Valentine’s Day in the Czech Republic”