“Elections are won by men and women chiefly because most people vote against somebody rather than for somebody.” –  Very true words spoken about elections by Franklin P. Adams.

It’s an election year in the U.S. so that means a big show that is seen worldwide has invaded our news networks, social medias, daily conversations, etc.

So who are the candidates, what do they stand for, and what are their chances of winning?

A graduate of Columbia University and Harvard law school, who went on to become U.S. senator from Illinois, and is now seeking a second term in the White House, but must convince an electorate that has been dealing with a poor economy and high unemployment.

“a form of realism unafraid to deploy American power but mindful that its use must be tempered by practical limits and a dose of self-awareness.” – E.J. Dionne

Check out Obama’s positions on all the issues.

A graduate of Harvard, former Massachusetts governor, a successful businessman, and the classic Presidential look, he is the ideal candidate for Republicans to run against incumbent President, Obama.

After working for Bain & Company, a management consulting company for 7 years he cofounded a spin off company, Bain Capital, where he was President, sole shareholder, and CEO.

The “private equity” company was initially venture capitalist but switched to a more lucrative focus as “leveraged buyouts.” Buying existing companies with money mostly borrowed from banking institutions using the newly bought companies’ assets as collateral, then taking steps to improve the companies’ value, and finally selling those companies once their value peaked.

As a result of his business career, Romney and his wife have a net worth of between $190 and $250 million.

In 2002 Mitt was elected Governor by running as a “not a partisan Republican” but rather a “moderate” with “progressive” views.

His health care reform, naturally called “Romneycare,” was the first of its kind the United States. It requires nearly all Massachusetts residents to buy health insurance coverage or face escalating tax penalties, such as, the loss of their personal income tax exemption.

When elected, he faced a $650 million shortfall and a projected $3 billion deficit as Governor, through a combination of spending cuts, increased fees, and removal of corporate tax loopholes the state achieved surpluses of around $600–700 million during Romney’s last two full fiscal years in office.

This is grounds for credibility in ability to reduce spending and cut the deficit as President. 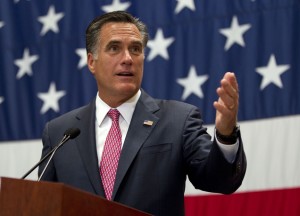 Check out Romney’s positions on all the issues.

People magazine included Romney in its 50 Most Beautiful People list for 2002.

Read about Mitt’s Vice President choice, Paul Ryan, and where he stands on the issues.

U.S. presidential elections, the Electoral College system allows each state to decide the method by which it awards electors. In general states vote consistently red or blue/Republican or Democrat.

However there are a few key states where no party or candidate has overwhelming support, and could go either way. Since a national campaign is interested in electoral votes, rather than the national popular vote, it tends to ignore states that it believes it will win easily; while these swing states are covered in campaign signs, rallies, and ideal photo opts for each candidate.

For example, many southern states like Texas, Alabama, and Mississippi tend to vote conservative (Republican) while states like New York, California, and Oregon consistently vote Democrat. Many people in these states feel their votes don’t really matter.

Map of Swing States and how they might vote.

Polls have the two candidates only a few points apart, and it is clear these states will probably play the largest role in who will be in the white house for the next 4 years.

Check out some music inspired by the Presidential election. 😀

Who do you think will win this Presidential election, and what do you think a victory for Obama or Romney will mean for the rest of the world?

This post is not suppose to have any bias, just presenting the facts, providing information, and easy access to sites with information for you to make your own decision on who is the best guy for the job. 🙂

One thought on “U.S. 2012 Presidential Election”