What’s the first thing that comes to your mind when hear about Munich?

2- Women carrying 10 beers in their hands

3- Men with mustache and dressed in weird suits 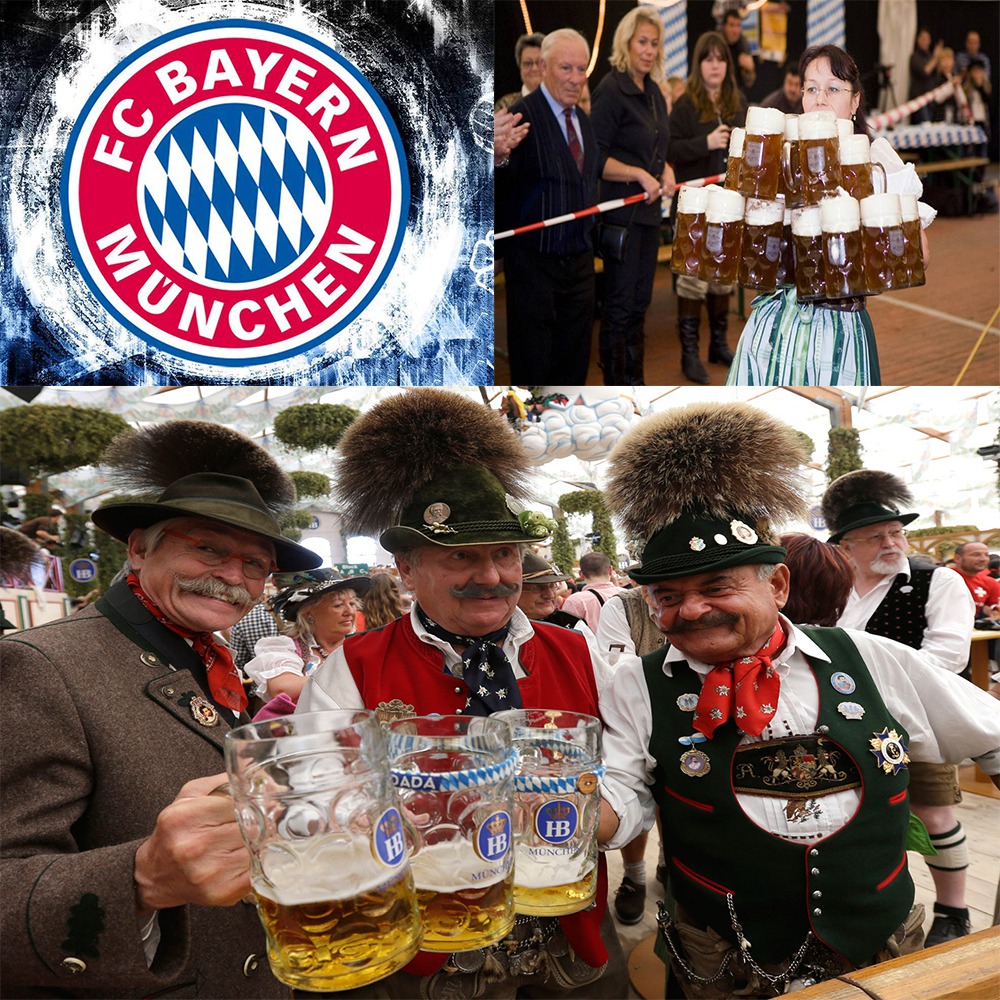 If the answer wasn’t one of the suggestions, I don’t know what you were thinking. But it’s natural that this happened:

– Last year, Oktoberfest recorded a number of visits of 6.4 million people and 6.9 million liters of beer were drunk during the event.

So when I decided to go to Munich, I wasn’t expecting so much from the city…I’ve never been so wrong. On a sunny Sunday, the tour was divided/planned in 2 places/points: 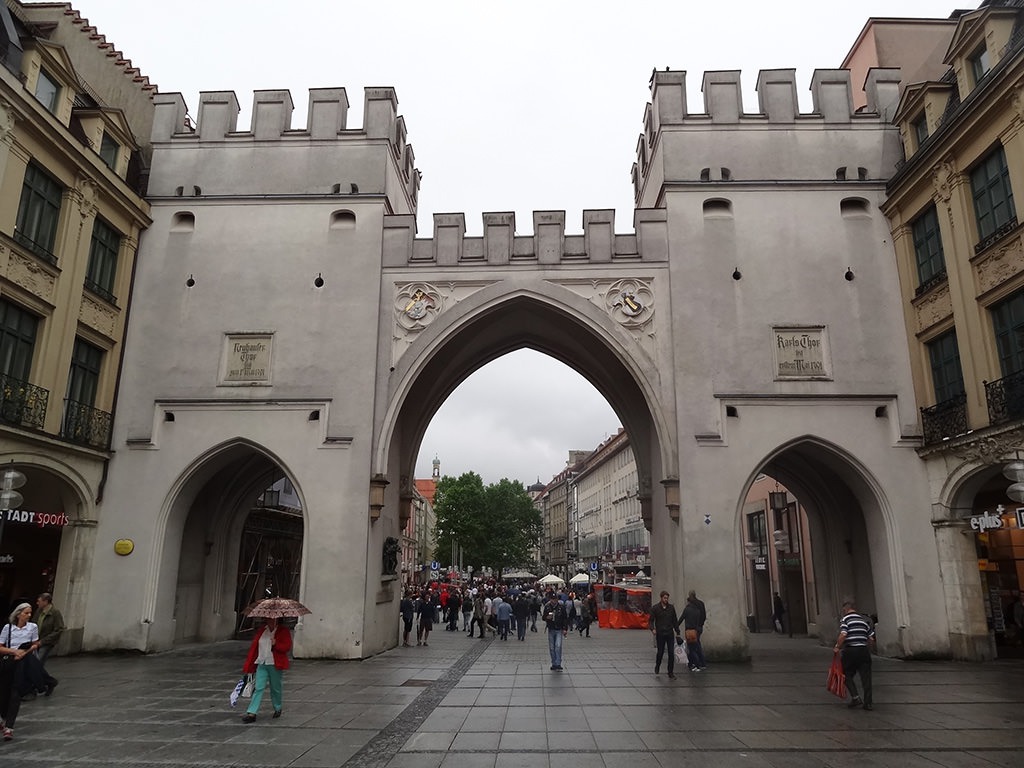 Through all the way, the towers of Frauenkirche, with their green onion shaped domes can be sighted. The church built in 1488 was partially destroyed in World War II, but already re-erected. Nowadays, it is being restored, so the pictures aren’t as good as expected. Its main nave is 100m long by 40m wide. 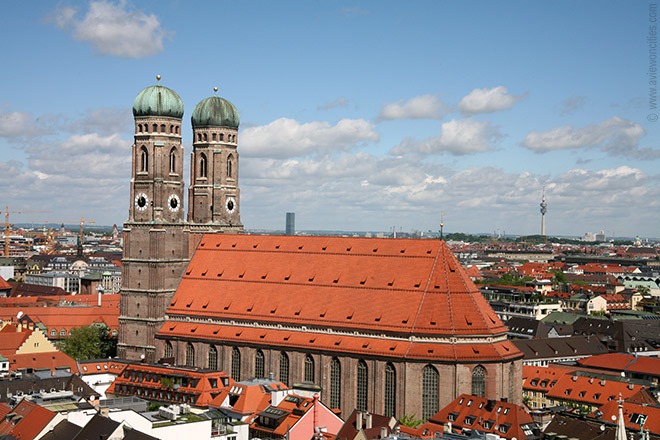 Just 300m along, we arrive to the Marienplatz from where we can see the Marian Column. It was erected in 1638 to celebrate the end of Swedish occupation during the Thirty Years’ War and is topped by a golden statue of the Virgin Mary, Altes Rathaus, the city council in Munich and Rathaus-Glockenspiel. 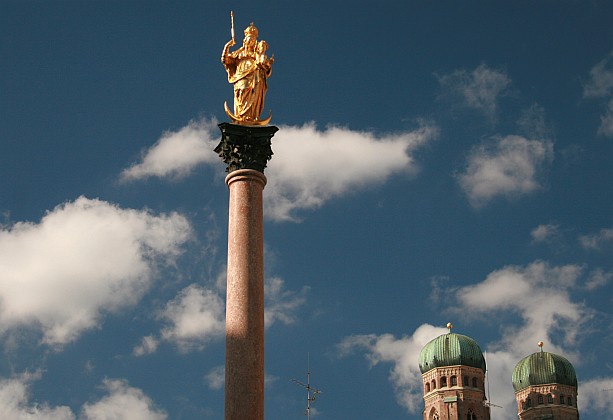 The facade of the Rathaus-Glockenspiel displays statues of dukes, kings and princes electors of Bavaria, as well as saints and mythical figures. Every day at 12h and 17h, the bells start to ring and some representations/figures get out of the clock. They re-enact two stories from the 16th century to the amusement of mass crowds of tourists and locals. It consists of 43 bells and 32 life-sized figures. The top half of the Glockenspiel tells the story of the marriage of the local Duke Wilhelm V to Renata of Lorraine. In honour of the happy couple there is a joust with life-sized knights on horseback representing Bavaria (in white and blue) and Lothringen (in red and white). The Bavarian knight wins every time, of course. 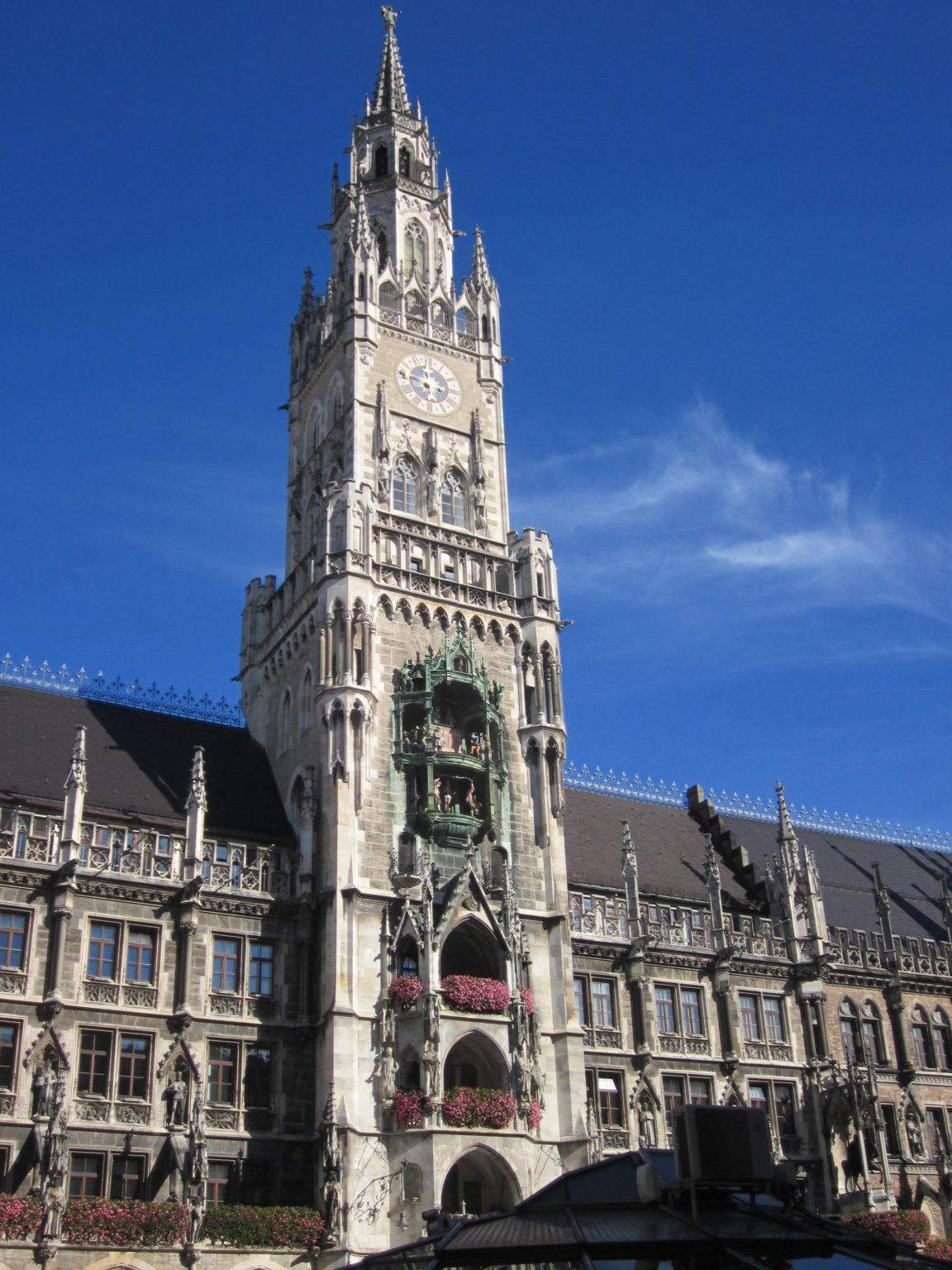 This is then followed by the bottom half and second story: Schäfflertanz (the coopers’ dance). According to myth, 1517 was a year of plague in Munich. The coopers are said to have danced through the streets to “bring fresh vitality to fearful dispositions.” The coopers remained loyal to the duke, and their dance came to symbolize perseverance and loyalty to authority through difficult times. By tradition, the dance is performed in Munich every seven years. This was described in 1700 as “an age-old custom”, but the current dance was defined only in 1871.

Until lunch I was able to see Feldherrnhalle and Max-Joseph-Platz, which was named after King Maximilian Joseph and Leopoldstrasse.

I decided to have lunch in a traditional Bavarian brewery call Hofbraeuhaus. It is open since 1607, but only in 1828, King Ludwig I opened the court brewery to the general public. 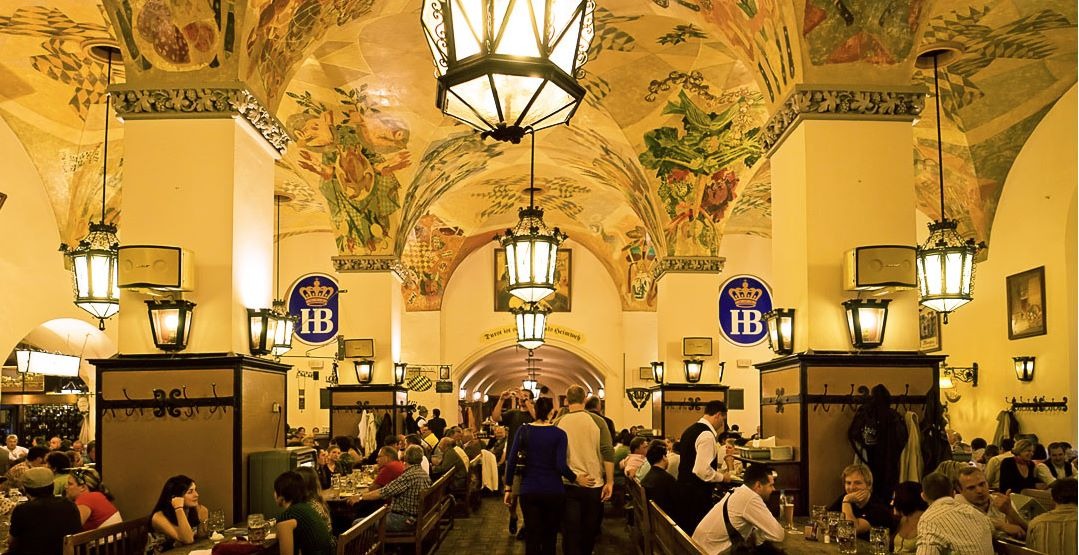 You can eat some traditional German Food and I had the opportunity to drink my first liter glass full of Bavarian beer. Prost! 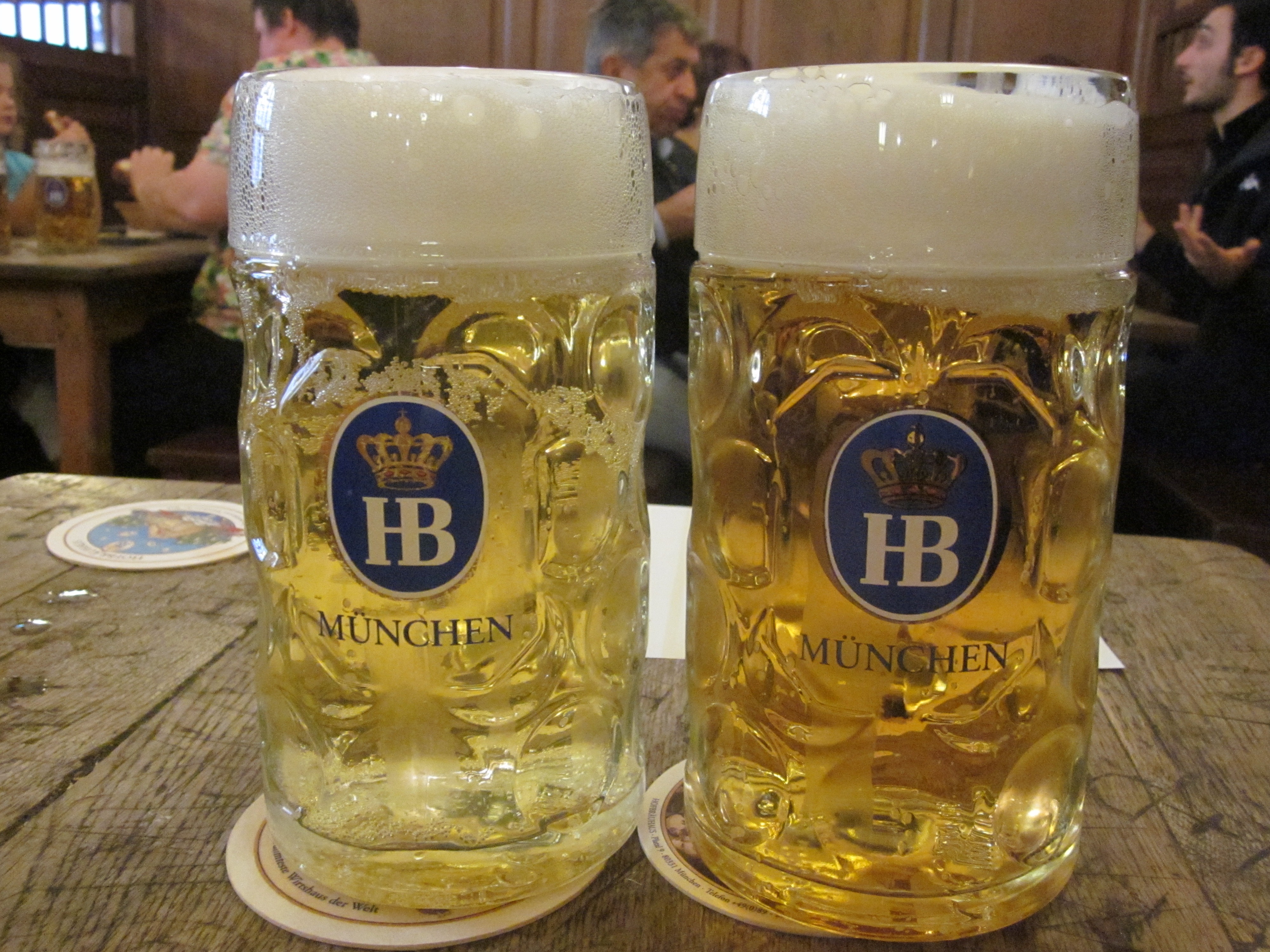 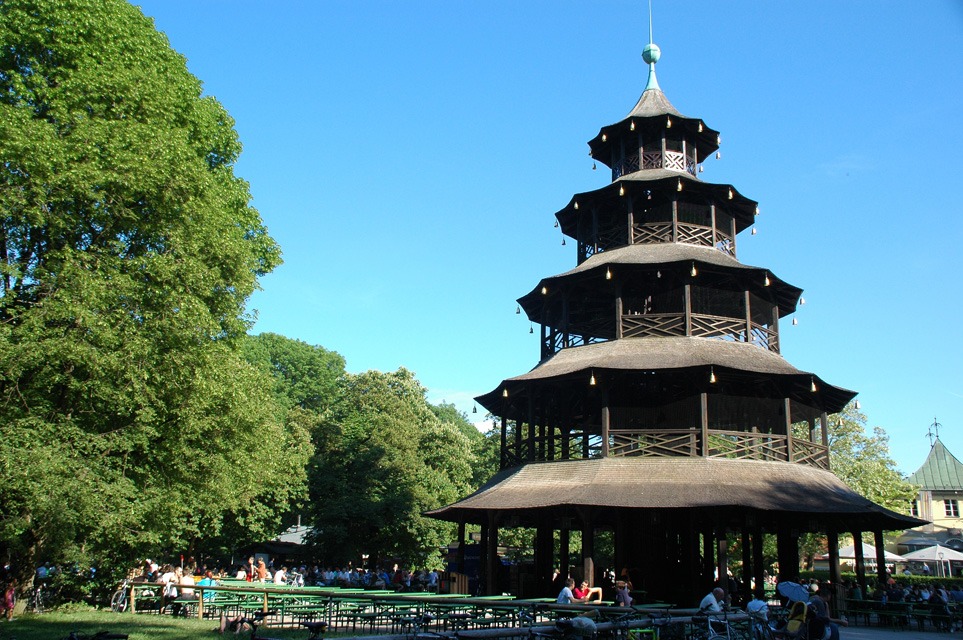 But in the English Garden, I saw the most amazing thing that you would not expect to see in the middle of a park in Germany. In one of the artificial streams flowing through the English Garden, you have the possibility to surf! How is this possible? There is a standing wave produced by the water pumping mechanism, and one person at a time, the surfer can jump into to the water, until they fell down off of the board.

If you live in Czech Republic, you can catch a bus or a train from Prague directly to Munique, and in only in 5 hours you are in the centre of Munique.