Tuesday 30th April, I was at the Festival of Majáles in Prague, an event where about 20 000 people come together, most of them students. Music + Day before bank holiday = Big Party! 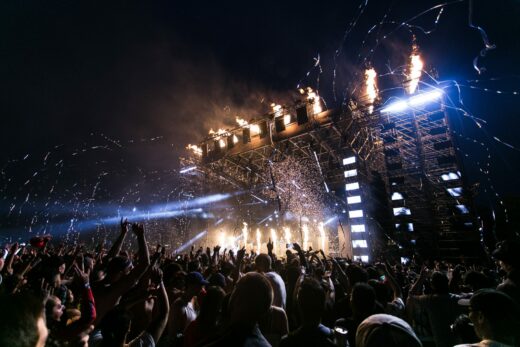 Majáles is one of the main festivals in Czechia

A little bit of erudition

This festival which takes place in main cities of Czech Republic is a tradition which comes from Bohemia during the 19th century. It was a meeting to celebrate “beauty of the student life”. It was forbidden by Nazis and Communists regimes but was brought back not long ago, thanks to political changes of the last 20 years.

Czech students love this event, which starts with a parade and then concerts, shows, and the traditional “king of Majáles” election.

Arrival on the site

I went with Gabriella (colleague at Foreigners.cz) and Martin (her boyfriend). We arrived at the Stromovka Parc around 6p.m., after office hours. Although the concerts started around 1p.m. there was still a lot of people arriving in the late afternoon.

The tram brought us to Vystavice Holesovice station, on the south-east side of the park. The event took place on the north-west side so we had to across Stromovka before catching sight of festival entry.

The entrance ticket cost 500 CZK, but it was possible to get a discount if you bought the ticket more than a week in advance.

Once at the entry, we give the ticket and receive a wristband in order to be able to leave and come back without any problems. Once we entered I realized – this was not a small student party.

A real festive atmosphere which is how I like it: Concerts on big stages, beer, SpongeBob balloons, and nice background music.

Every band who performed was exclusively Czech (+1 or 2 Slovak groups.) Most of them sang in Czech but some of them also had an English repertoire. So I spent some time watching the concerts with some vital intermissions for beer and food.

First of all, we have seen MIG 21, a rock band made up of 5 members, who gave some rock n’ roll atmosphere to the festival on the biggest stage of the festival: Mayzus Stage.

We heard a bit of the Tomas Klus concert who played a more gentle and romantic genre but the hunger won us over and we had to search for something to satisfy our appetite.

Of course on the site, you can have a beer and something to eat such as sandwiches or Czech specialties like beer sausage or Lángos which is a kind of bread buckwheat pancake with ketchup and cheese named Langos.

I also caught sight of shorts student show and a stage. Martin told me that they were challengers for the election of “King of majales”. Each year, there is a contest between several students from different universities, who have to perform a show on a stage.

Attendees can vote for their favorite giving their tickets at the end of Majales. I saw a student dancing “Gangnam Style” and “Cotton eyed Joe”, and another one who juggled with a soccer ball then a tennis ball. Being a football lover, I would like to vote for him, but I forgot to cast a vote when I left.

After this break, we were at “Gambrinus Excellent” Stage to watch Chinaski’s concert. It was my favorite concert. This Pop-Rock band made up of 6 members is very liked in Czech Republic. They made crowd rising, singing lyrics and dancing on the music rhythm. They played saxophone and trumpet, which give to the concert a real festive atmosphere.

We were very well placed during the concert, and at the end, when we turned over to join another concert, I was astonished by the multitude of people that was here! It was probably the concert which attracted the most people.

Then, it was Krystof, and Mayzus Stage – a Punk/Folk band from North Moravia, made up of 4 members, who is also very famous in Czech Republic. The music was so festive and they showed us a video montage on the screen. It was lot of videos of their fans singing and dancing on one of their songs: Zatančím. The show finished with fireworks.

The last concert was Monkey Business, and songs were in English. This band made up of 3 singers and 4 musicians. One of them, Roman Holy, is very famous. He is a Czech compositor, actor, singer and producer. There was also Tonya Grave, an African American from New-York, living in Czech Republic for years. Monkey Business was born in 1999 and it is considered as the best of the Czech Funk.

I like to attend to this kind of festival in France so I liked Majáles a lot. There were a lot of students, lively music (even though I didn’t understand lyrics :)) and lot of shows on stages. In any case, I recommend to foreigners living in Czech Republic to attend at least one to Majáles in Prague.

2 thoughts on “The festival of Majáles”