From July 24th to 26th, almost all of Foreigners.cz staff was gathered in the small town of Pšovlky, in central Bohemia for the Summer Session. Usually, all the branches are meeting twice a year, during winter and summer. This is a training weekend where all the team members are doing team building activities, workshops, discussions and sharing insights. This is also a way to integrate new members in the team! This training session was in Czech so I did not attend every meeting because it would have been too complicated to translate every single word.

I arrived in Pšovlky on the Thursday evening with Liduška, executive assistant. We took the bus to Prague where we changed for a train and then another bus! The journey lasted around five to six hours but it was alright since the weather was not too hot to travel. The city is literally in the middle of nowhere. There are a few houses and farms surrounded by fields and woods. 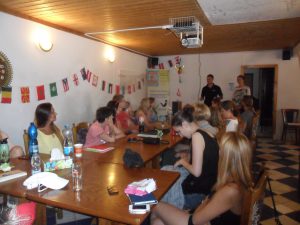 The official opening of the Summer Session was on Friday afternoon. We started with a round of introductions (name, branch, time spent working for Foreigners.cz) which was quite useful to get to know everyone since I had never met the majority of the participants before. After this, we headed outside to play different team building games. Among the games, there were some to memorize the names of everyone, other to trust each other or encouraging team spirit. The majority of the participants could even levitate! After dinner, we played a board game similar to “Time’s Up!”. This is played in team and people from your team have to guess a word when you talk, draw or mime. We alternated rounds in Czech and in English, so everyone could participate. Overall, the day was interesting and it was nice to meet all the people. 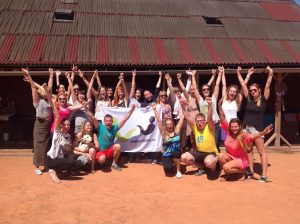 First thing in the morning on Saturday, we did a little bit of exercising to get energized! After breakfast, the meetings were only in Czech so we, interns, got a little bit of free time. Along with Asia (PR intern of Prague), we decided to go for a hike around the city. We walked along a wheat field and then got in the woods. We were in the middle of the wilderness! We even saw hinds! At some point, we got lost, so we got back to the Summer Session late for lunch! So, we were a bit late for the afternoon workshops. We experienced several exercise regarding communication which were quite unusual to me but compelling! 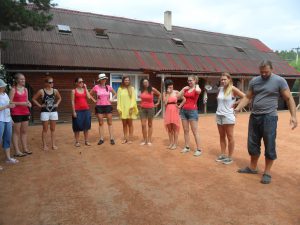 Later on, we had some leisure time before dinner. Everyone was able to relax, play tennis, ping pong or take a dip in the pool! Then, we had to write a letter to ourselves and set different goals for the next six months. The letter will be then open during the winter session. The team members who have been working at Foreigners.cz for more than six months were then able to read the letter they wrote back in March. It should be nice to see if you stucked to your intentions and fulfilled your goals. Writing this letter was a real introspection for me because I had no clue on what I would be doing after this internship. After this, we did some more deep thinking on what kept us for having accomplished these goals already. So we had to identify which were our fears and wrote them on a spare sheet of paper. Then we all headed outside and the most impressive part of the weekend was about to begin! 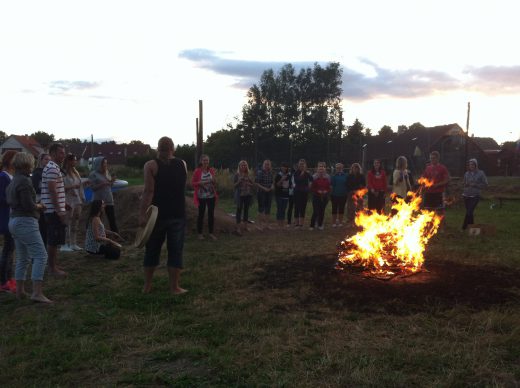 Indeed, Pavel aka Kuča, who was in charge of organizing the different team building games during the weekend explained to us that we will go beyond our fears and reach the top! In other words, we will simply walk on fire, or on embers to be precise! So, Kuča started to lay a fire as the ancients were doing, which means he used some kind of powder, rocks and stalk. 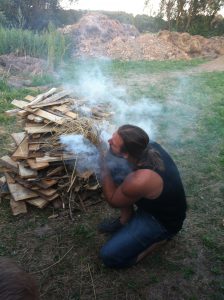 When the flame got bigger, we helped to light the stack of woods with our papers on which our fears were written. The aim was to destroy our fears and walk on it! As the fire was burning, Kuča explained to everyone how they were supposed to walk and which attitude they should have. This helped to reassure the people who were doubtful but also toned down the danger of getting burnt. More importantly, it brought the group close together, people were inhabited by willpower and strength. I think there was a kind of group dynamic and you could feel that everyone was supporting one another. The thing that also helped was that everyone took an instrument to play music and it built an appealing rhythm, quite entertaining to make you want to go accross the embers. When the fire was consumed enough, Kuča laid a path of embers on the grass on a few meters. Everyone gathered around and, one by one, people started to walk on it. I did not walk on it myself but I felt carried away by all the energy going around. Once someone had gone through the burning path, you could notice the pride and strength on their faces, they looked like warriors! Some of the people went several times through the path! I am not entirely sure how long this lasted, an hour and a half maybe more. 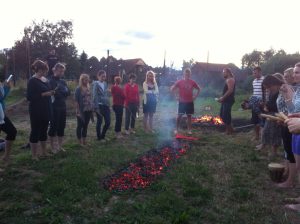 After this, there was a different atmosphere going on among the team. Everybody was feeling amazing I believe. The evening went on with some singing Czech folk songs accompanied by guitar playing. Asia and I took some time to write little notes to the others. Actually, everyone had an envelope with their names on it and people had to write little messages to each other throughout the summer session. The night went on, people were having fun and some of them partied until the early morning! 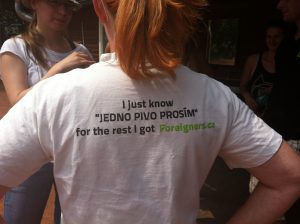 On Sunday morning, we had some breakfast, and then the PR interns could leave because the rest of the Summer Session would be in Czech language. We said our goodbyes to the team and jumped on the train home! Overall, this was a great experience for me because I got to meet almost everyone working at Foreigners.cz, this also gave me an insight on how a company seminar looked like!

One thought on “Summer Session summarized by Marie, PR intern in Brno!”