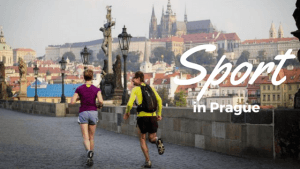 Do you want to lose weight, to blossom into a great player, to do a team sport or simply enjoy a beer among friends in front of a football game? You are reading the right text to get to know the unmissed places of Prague in terms of sport!

Do you want to watch sport?

Do you like sport but you don’t want to move too much? Come to watch a sports match. There are two leading sports in the Czech Republic: football and ice hockey, both have the largest attention of media and supporters.

Football is the most popular sport in the Czech Republic. The Czech football team has a grandiose past with a victory in the European Cup in 1976 and a the European Cup final in 1996. Some Czech players have marked the spirits, such as Antonín Panenka (born in 1948, this ex-player of the Bohemians Praha is famous for his penalty during the final of the UEFA European cup in 1976), Josef Masopust (1931-2015, the ex-player of Dukla Prague won the golden balls in 1962), Pavel Nedvěd (born in 1972, this ex-player of the Juventus  won the golden balls in 2004), Tomáš Rosický (born in 1980, he was a famous player of Arsenal and he is an actual player of Sparta Praha), and Petr Čech (born in 1982, he is one of the famous goalkeepers of his time, he plays actually in Arsenal). Some teams of the national championship are very strong, for example, a famous Prague team Sparta Praha. If you are a fan of football go to see this mythical team or the other team of Prague who is in the best of the moment – Bohemians FC.

The Czechoslovak & Czech ice hockey team was in the top 5 of the world’s best teams for years, notably thanks to its 12 victories in the world championship, the last in 2010 and the victory of the Czech team during the 1998 Winter Olympic Games in Nagano, Canada. Some great Czech players have chosen to leave to NHL but the national championship remains interesting thanks to the teams located in Prague, HC Sparta and HC Slavia Praha.

If you want to have a really great sport experience in the Czech Republic, go to see a match.

There are sports favorite to Czech people, for example basketball or tennis – for example the famous tennis player Martina Navratilova (born in 1956, she won 18 grand slam and she was also the 1st woman at the ranking) comes from the Czech Republic but has moved to USA. New sports make their appearance too, such as baseball, tracks and field, and also running. If you want to see other sport than hockey or football check this page.

Do you want to do sport?

If you are an addict to running you will find your happiness in Prague. Indeed, the Czech capital is full of parks where you can run. Letenské sady is one of the most famous ones. If you want more difficulties you will enjoy the Petrin Hill. In case you wish to challenge yourself and participate in a race you will find a lot of possibilities like the Half-Marathon, the Marathon, and other ones at this website.

Whether it’s the fried cheese and beer that’s getting to your waistline; or you are looking to get active and be fit. Do not worry you will not lack a fitness center to satisfy your needs in the capital of Czechia. Many choices are available to suit your requirements. If you are looking for a plethora of machines and English speaking staff to assist you you most likely will have to pay a bit more for it like in this fitness center. However, if you feel confident in your gym knowledge, smaller, affordable workout rooms like  this one can be found all over the city.

If you prefer to do sport with friends and practice some team sports like a football party after work you will find your find your happiness here.

One thought on “Sport in Prague”