Moving to a new country might be stressful, and some of us know how just two puffs of a cigarette, every now and then, can help in relaxing the nerves after a busy day of study/work. It’s a habit. A good alternative to the classic coffee break?  You can’t have 6 espressos per day, can you! An ice-breaker with the new colleague or an excuse to talk to that person you wanted to talk to last Saturday night at the club?

The Czech Republic has been one of those European countries which has allowed smoking in pubs and restaurants…until now. Indeed, statistics have shown that about 28% of Czechs smoke on a regular basis, slightly more than the EU average of around 24%.

Now get ready! Things are about to change. From the 31st of May (a day also known as World No Tobacco Day) onward, smoking tolerances will change.

On the February 14th, President Miloš Zeman officially signed the anti-smoking law, approving the ban on smoking in indoor areas of restaurants, theaters, cafes, and cinemas throughout the Czech Republic. The law will be put into effect at the end of this month.

The bill has been approved by both houses of Parliament, and the final draft has been signed off by 45 of the 68 present members of the upper chamber. Polls taken while the Czech ban was pending showed that three-quarters of the Czech population supported the ban, proving that most of the people living in this country felt ready to follow the European trend of banning this kind of habit.

Health Minister Miloslav Ludvík (ČSSD) said the law will not only protect restaurant and bar patrons but also the staff working at those venues. As workers face long-term exposure they constantly risk the quick impairment of their lungs and degradation of health in general. Thus this ban is also meant to protect these service professionals. 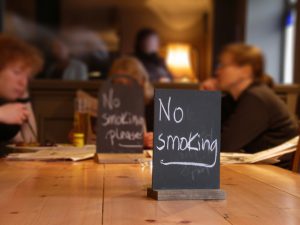 In addition, the bill will prohibit smoking on travel platforms, and the use of electronic cigarettes in hospitals, schools, and shopping centers. Besides, movie theaters, concert halls, exhibition venues, and indoor sports areas will be banned from having separate rooms for smokers. Although some critics tried to preserve separate smoking zones, the government considered the maintenance of these areas unnecessary.

For those incapable of quitting smoking, all is not lost: e-cigarettes and hookahs will still be allowed in cafés, bars, and restaurants. If you can’t give up smoking, just be careful. Sanctions for those who persist indoors will be heavy. Penalties will not only aim at common smokers but sellers as well; fees for the sales of tobacco to minors are expected to rise.

Foreigners.cz has always supported and promoted non-smoking events which carry over to our monthly MeetUp events and we believe that this kind of environment is more friendly and pleasant than the same-old foggy ballroom where people swim into waves of mist.
Although some of our employees are regular smokers, some abstain and some are on-again/off-again, we don’t believe stepping outdoors when a cigarette is needed has ever killed anyone. Moreover, going outside for a smoke break can make it easier to relax after hours of loud music at a club or dealing with noisy tourists sitting at the table next to you.

I personally smoke a couple of cigs per day (ok, maybe more than that) and I never had the feeling that smoking indoors would have added something to the act of smoking itself. In my native country Italy, smoking inside pubs, restaurants and public venues, in general, was banned in 2003 and I can promise that after a few years it seemed perfectly normal to have to do it outside. And who knows, maybe for some of you, the ban could be a good reason to quit smoking altogether and start a healthy lifestyle…but for that, you would need to quit drinking as well. Maybe I’m asking too much. I can bet that Czech parents, children in general and your mother-in-law can’t wait to see you throwing away that ugly cigarette box in your pocket on which is a fantastic picture of that guy with 2 throat cancers, a stoma and nasty black tongue, products of his smoking habit.

Comment and share the content if you wish! See you at our next cool event at one of the pubs and clubs in town. Just one thing: leave the tobacco and filters at home for once, would you?

Volunteer for the Italian Red Cross, I enjoy good company, off-road motorcycles and pasta 'al dente'. My philosophy upon personal growth and future perspectives can be summarised quoting the words of the famous Turkish poet Nazim Hikmet: “The most beautiful of [our] seas, is the one we haven't sailed yet […]”.

30 thoughts on “No Indoor Smoking Anymore! The New Ban in the Czech Republic”