Two days of exhibitions, discussions, workshops and mainly, live music played by people who came to the Czech Republic from many different countries. The ExpArt Fest which takes place at the end of October in Brno is organised by a group of enthusiasts who, being foreigners themselves, want to expose the work of foreign artists in local environment. 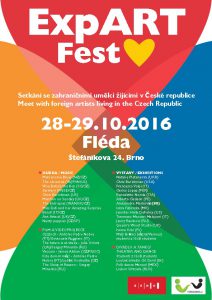 Portuguese António Pedro Nobre and Peruvian Carlos Lopez are members of the team behind the ExpArt festival. What do they say about the background, program and aim of the event?

This is not the first ExpArt festival. You organised a similar event 5 years ago in Ostrava.

António: Yes. When I was living in Ostrava, I became part of a group called Alba Club International, a non-profit organization founded by Christopher Gilliland, a Scottish expat, that organized several small events aimed at integrating foreigners in Czech society. One of these events took place at the Festival v Ulicich 2011 who gave us a space where for 3 days we organized concerts, theater performances, art exhibitions and video projections, all featuring creative foreigners who lived in Ostrava. The initiative was quite positive and we opened the minds not only of many Czech people who understood the foreign community a little bit better but also the minds of many expats who basically spend their time in foreign language meetings or having beers in some expat joint and never make a true effort in knowing Czech society.

Why have you decided to hold the festival in Brno now?

António: The decision came after I got a proposal of showing a documentary I am working on at Club Fléda. It is such a big space and there are so many creative foreigners living here and never had a proper chance to show what they do that I thought it could be a great idea of doing it again. Also, Brno is a city where there is an even wider gap between foreigners and locals than in Ostrava, where locals tend to be less open to expats and these tend to live even more isolated, so having a space where they could hang out together even if only for a couple of days is really needed. I proposed the idea to Fléda and they liked it.

For whom the ExpArt Fest is?

António: ExpArt is a multi-cultural and multi-genre festival, aimed to everybody from every age. Although it is based in “artistic” performances, it goes beyond that. It is a festival where people can see how a city like Brno and Czech Republic in general can inspire some creative people who were born in another country and find the combination of both, or simply learn something about another country when seeing some traditional dance or even see how Czechs and foreigners can work together when playing in a band, doing a film or performing a stage play together. There will also be food from other countries cooked by foreigners who live here and also some discussions and workshops where people can learn something new or exchange new ideas… everybody is welcome!

Carlos: People should come to ExpArt Fest because they will be able to discover and enjoy artists and bands they did not know exist in their beloved city. They will see how foreigners are being influenced by Czech culture and are part of it now and lastly what a better way to spend two days with Czech beer and live music.

How did you personally get to the Czech Republic?

António: I have been living in the Czech Republic since 2005, where I first came to film a TV commercial for a Portuguese company in a studio in Prague and while there I met my current partner, that is Moravian and decided to move here to be with her. I have lived in Olomouc, Ostrava and currently I am established in Brno, where I became the proud father of a little Brňák named Hubert.

Carlos: I am already 8 years in the Czech Republic. I arrived to be with my family as I have my son here with a Czech woman. We met while working in cruise ships around the Caribbean. I came to Brno in 2008 and beside my office job in a software company (which I like) I continue working on photography and teaching that to foreigners.

How did you two meet?

Carlos: António made the open call for artists to participate and I wrote him. We agreed on a meeting and since the I got slowly more involved into this project. Which is very interesting as it is very different to my office job but still the principles from change/project management can be applied. As we both are creative people the communication has been easy for both of us.

So you are both artists.

António: I don’t see myself as an artist but as a creative person who grew up in a creative household where popular Portuguese musicians used to hang out, while writing songs with my father who also worked in advertising. My mother was a talented painter who opted for being a creative teacher instead of trying to follow an “artistic” career. So like my parents both me and my brother ended up being quite creative professionals who like to hang out with other creative people. That is perhaps why more than 50 % of my video work is related with performing arts, mostly music, through my collaboration not only with several musicians but also festivals like Colours of Ostrava or Ostrava Jazz Open. I worked with dance and theater as well, including the National Theater or the Shakespeare festival in Ostrava. I have experimented in amateur theater and in the mid 90s I used to scream in a Metal/Crossover/Punk/HC/Crust band who made a small name in the local underground scene. I organized concerts, published fanzines and even released compilation records in vinyl. So one can say that “Art” has been with me from the beginning and is a third of who I am, being the other two thirds a traveler and a father.

Carlos: My relationship with art and artists started in my childhood. My father is a sculptor so part of our house in Peru is used as his workshop. There I used to see him work with clay, stone and wood, and I had access to all his books from different artists, modern and classics, too. Some of my toys were made by him. And some friends of my father were artists as well. It was a natural step then for me to study photography and I had the support from both, my father and mother. Art is very personal to me. It is a way how to escape from reality when this sucks or challenge concepts when these become obsolete. It’s a way to see beauty where nobody else finds it and to enjoy our lives with its ups and down.

The festival goes on from October 28th – 29th in the Fléda Club in Brno. Tickets cost 150 CZK for one day and 250 CZK for both days. You can buy them at Hostel Eleven, Dominikánská 347/11, Brno; Foreigners.cz’s clients can get them in the Brno office at Masarykova 32, too.

António Pedro Nobre was born and raised in Lisbon, Portugal. He works part-time in TV and Video production and he spends his free time writing travel articles and even published 5 books, organizing trips all over Europe that he leads (including Lisbon for Czechs) and organizing multicultural activities. In 2016, together with Emanuele Ruggiero (Italian director living in Brno), he made a documentary movie about foreigners living in the Czech Republic called CzizincII.