For my first day in Brno, I visited Spilberk Castle. I believe that this is one of the sites that everyone should visit when coming in Brno. A little bit of history: Spielberk Castle, situated at the top of a hill, is actually a fortress built in the XIII century by King Ottokar I st of Bohemia. It was built to be the principal residence of the king but also to be a defensive position and a fortress for the protection of the royal town of Brno. 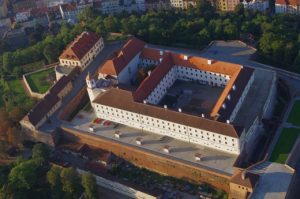 The fortress had an important role during the thirty years war. In 1645 it resisted Swedish army attacks. Then is transformed to become the most impressive baroque fortress of Moravian history. In 1783, emperor Joseph II of Saint-Empire decided to transform it into a prison and it became actually the hardest one of the Austrian monarchy. In order for the castle to become a proper prison, the buildings that were used for military equipment were refurbished. In 1809, Napoleon destroyed some parts of the fortress, so Spielberk lost its military importance.

The fortress was completely transformed into a prison for convicts that committed the most serious crimes but also for political prisoners from different nations that opposed the French.

In the Spilberk prison, we could find the Hungarian Jacobins, the Italians patriots, members of Giovine Italia and the participants of the uprising of Cracovia in 1846 locked their. After the closing of the prison by François-Joseph I St. of Austria in 1855, the Spielberk is used as a military barracks till 1959. during WWI and at the beginning of the Nazi occupation, underground rooms were again transformed into dungeons. In 1962, Spilberk was declared national cultural monument.

From 1987 to 1992, it has been furbished several times and now welcomes exhibitions and collections that help discover the history of the Castle and of Brno. And here is an interesting story: in reference to this prison, the Mont Saint Michel in Brittany, France, at that moment State prison of July Monarchy, is called the French Spielberk.

Well even if the climb is kind of hard (at least for those who are not fond of walking or sports), it worth it because there is a lot to learn historically but there also an incredible panoramic view from the top of the castle. On your way to the fortress, you can have a view of the cathedral ( the Saint-Pierre and Saint-Paul Cathedral). You can enjoy the place by sitting in the park around the castle.

If you go in the fortress court, you will see the well, and its particularity is that it is not straight but curved and is about 112 m depth. There are also the bells, that are on a wall not under a steeple. There are 15 bells that weight between 16 and 220 kg each. They ring at every peak hour from 9 am to 6 pm and can play 32 different melodies. The castle also shelters a museum, with the permanent and temporary exhibitions. It is the place of cultural activities all year around.