The years of fear, insecurity and helplessness experienced by all Pilseners finally ended on one sunny day in May 1945 – the day, when the American Army, lead by General Patton, liberated Pilsen from German occupation.

The atmosphere of this significant historic event is now celebrated every year by all people living in Pilsen in a memorial “Liberation Festival.” In the first week of May the city travels back in time and the historical center changes into authentic war camps – American and Czechoslovakian – both equipped with tents, first-aid stations, a canteen, and military police – exactly the how it looked like almost 70 years ago. If you come early in the morning, you might be able to see the morning warm-up of the soldiers, if you come around noon, you will see them eating lunch. In addition to this, there will also be historical performances regarding to this event – the roundup of Nazi soldiers and the hunt for collaborators.

Those interested in military technology will definitely enjoy the parade of military jeeps and armored cars, as well as the exhibition of military weapons – guns, revolvers, and even machine rifles.

The program of this celebration is also interesting because of its traditional events – memorials, meet ups with American soldiers, and many other cultural activities. One of the most appealing will definitely be the “Convoy of Liberty”, which you can see this year on Sunday 5th May at 11 am starting in Kaplirova street and continuing through Klatovska street to the city square.

It might be surprising to some people, but fashion played an important role during the Second World War. Handsome soldiers and beautiful ladies will take you on a tour of the fashion world of 1945 and the show will finish with traditional swing concerts.

The Liberation Festival reminds the people of Pilsen of one of the most important days in the history of the city and the authentic celebration allows the visitors to experience the atmosphere of this important event. If you get lucky, you might even be able to get a chocolate from an American soldier – the same way our grandmas used to tell us in their stories.

More information about this festival in English can be found here. 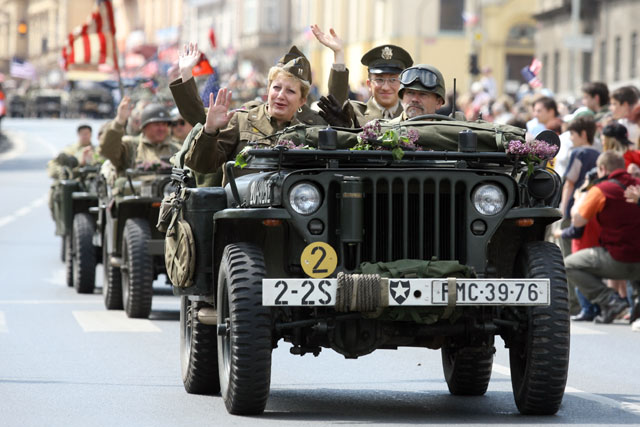