Saint Barbara is believed to have been an early Christian saint and martyr. However, there are not many authentic facts about her life and real existence.

St. Barbara’s Day is annually celebrated on 4th December. It is connected with the cutting of St. Barbara’s branches, know as barborky. According to the folk tradition, a branch has to be cut with the first ray of sun, from a cherry tree at least ten years old and then has to be taken to a house where an unmarried girl lives. If the branch blossoms on Christmas Eve, it means that the girl would find a groom in the coming year. Today barborky are also a typical pre-Christmas household decoration. In Bohemia, children put stockings in their windows on St. Barbara’s eve, into which St. Barbara puts small sweets, or coal, rocks, or potatoes if the child was naughty in the preceding period. 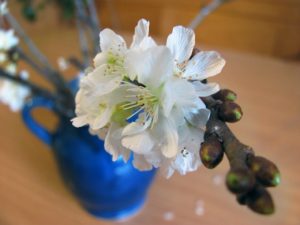 The most spread legend tells that she was the daughter of a rich pagan named Dioscorus, was carefully guarded by her father who kept her locked up in a tower in order to preserve her from the outside world.

Her father commanded that a private bath-house has to be erected for her use near her dwelling, and during his absence, Barbara had three windows put in it, as a symbol of the Holy Trinity, instead of the two originally intended. She acknowledged herself to be a Christian and upon this, her father drew his sword to kill her, but her prayers created an opening in the tower wall and she was miraculously transported to a mountain gorge.

Finally, she was condemned to death by beheading. Her father himself carried out the death sentence. However, as punishment for this, he was struck by lightning on the way home and his body was consumed by flame. Barbara was buried by a Christian, Valentinus, and her tomb became the site of miracles.

Saint Barbara is venerated in the Catholic Church, Eastern Orthodox Church, Oriental Orthodoxy, Aglipavan Church and Anglicanism. The Feast Day is on 4th of December, as it is considered that her martyrdom was on that date.

Annually, Saint Barbara’s Day is celebrated in Central and Eastern Europe – in the Czech Republic, Poland, Germany, France, etc. and in the Middle East – in Lebanon, Syria, Jordan, and Palestine, Israel among Arab Christians.

One thought on “St. Barbara’s Day”